Home › archery › How to Clean an Alligator Gar Fish

How to Clean an Alligator Gar Fish

Alligator Garfish are one of the largest freshwater fish in North America, and one of the best tasting.  Normally considered a “trash fish,” if you aren’t going to eat this blast from the paleolithic past, then please leave them for me and my crew to enjoy.

We’d just finished a wonderful Sunday get together celebrating the christening of one of my best friend’s son, and were busy digesting some pretty delicious food, when Joel rolled up with his latest bowfishing kill in the back of the side-by-side.  A 70 lb alligator garfish.

Joel’s a hunting and fishing freak (and a snazzy dresser)

Joel is a very special kid.  It would take more words than I could devote to this blog to describe Joel, but I’ll give you the condensed version.  Joel has taken 16 trips around the sun; however, he has more hunting and fishing experience than most men in their 40’s or even 50’s.  His father and uncles are amazing outdoorsmen, and Joel has taken up that roll for the next generation. He was home schooled growing up, and the backwater swamps, and bayous were his playground.  He was able to do his studies in accordance with the ebb and flow of nature in order to accommodate his hunting and fishing.  He is half my age in years, but his skills as an outdoorsman quite frankly leave mine in the dust.  He is very unique in all of the ways that you would want a young man of his age to be. 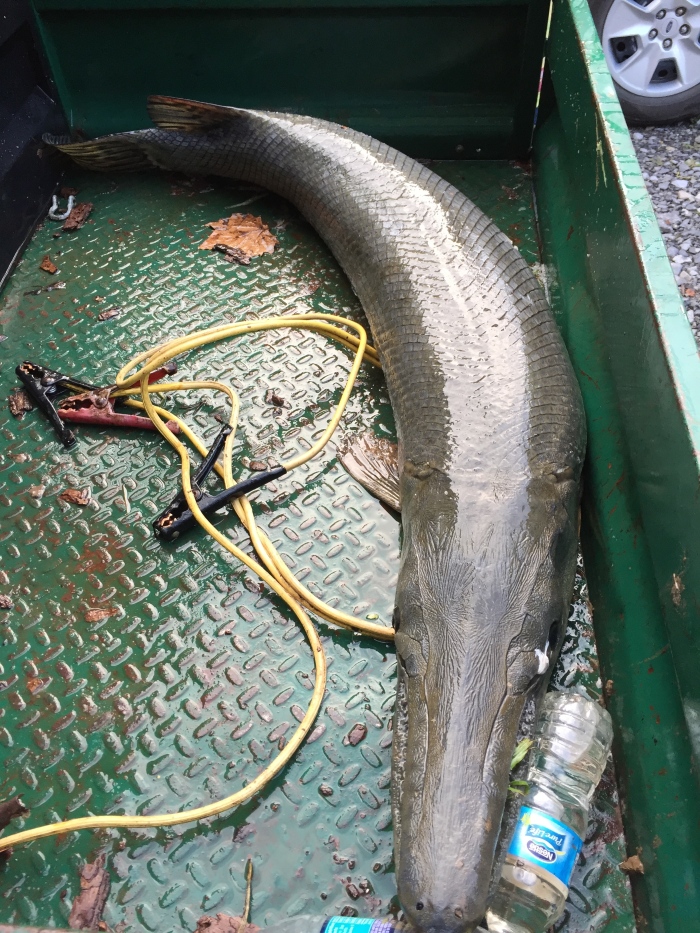 Even though this fish would be quite a trophy for most grown men who bowfish regularly, this fish is nowhere near his largest in length or weight.  Even so, he drove up, and after shaking my hand, and taking a few pictures, he asked me “Do you want some gar meat?”  Now, most of you are saying to yourself “Gar meat? That’s disgusting…Everybody knows that garfish is a ‘trash fish.’  They taste fishy.  I wouldn’t eat that if my life depended on it.”

I must admit that I used to feel the same way.  And trust me, they taste nothing like what you would think (if they are cleaned correctly).  I almost don’t want people to know how delicious they are, because they might overfish them.  Don’t let their not-so-attractive outer appearance fool you.  They’ve become one of my favorite freshwater fish, and they are so unbelievably versatile to cook with.  Their texture more closely resembles that of incredibly tender alligator meat than it does fish.  Thus, they don’t tend to “flake” and fall apart during the cooking process like other fish.  Therefore you can use cooking techniques that you would normally reserve for chicken, or red meat, but never fish.  However, they are equally as delicious prepared any way that you would traditionally cook fish (fried, baked, broiled, etc.). Much like any other food, the secret to unlocking the most incredible flavor and reducing the most inedible flavor is in the preparation, and preservation of the food.

Below is the easiest method to cleaning an alligator garfish, courtesy of Joel, the wild man:

Joel started out with a knife, but this fish’s armored scales were just too thick.  We switched to a cane knife to finish the job.

Joel begins cutting the skin and scales of the fish.

The alligator garfish with skin opened up.  All the pink/red stuff you see MUST be removed prior to cooking.  The pink stuff is what gives this fish it’s bad reputation, but the white meat underneath is delicious. 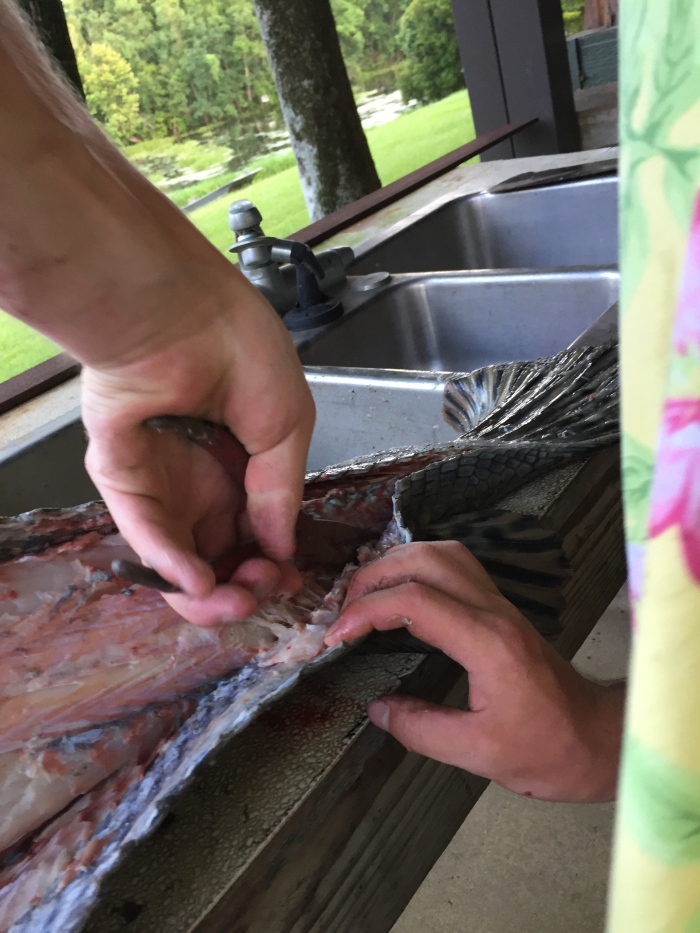 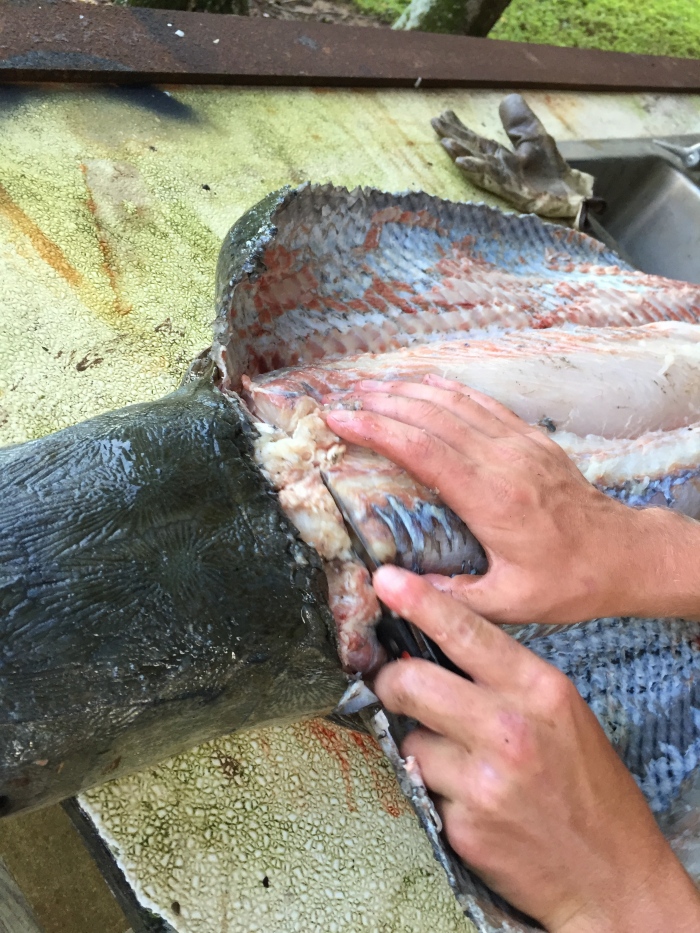 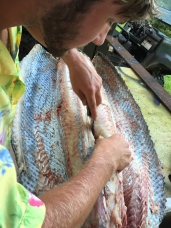 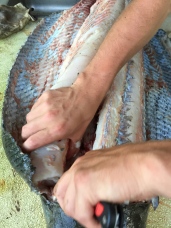 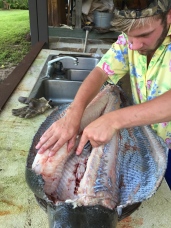 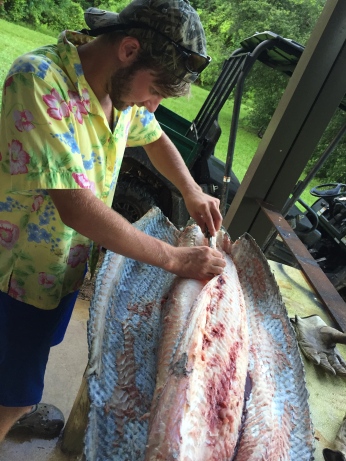 One of this Alligator Gar’s Fillets. 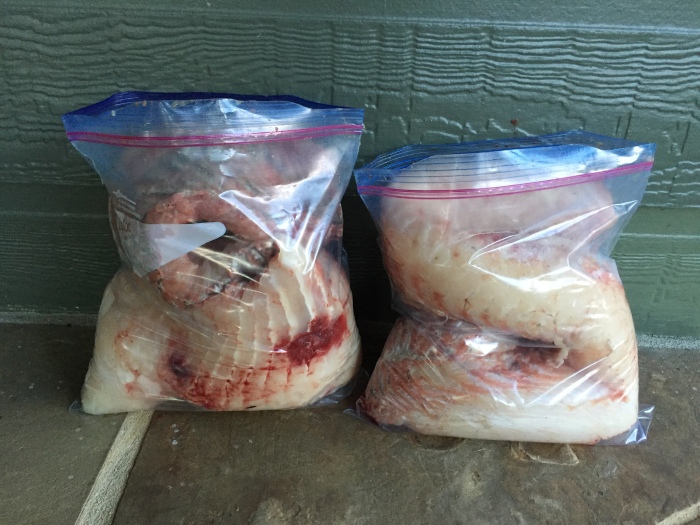 Dinosaur Meat.  All of the red or pink stuff you see in the photo will be carefully trimmed off before eating or freezing. 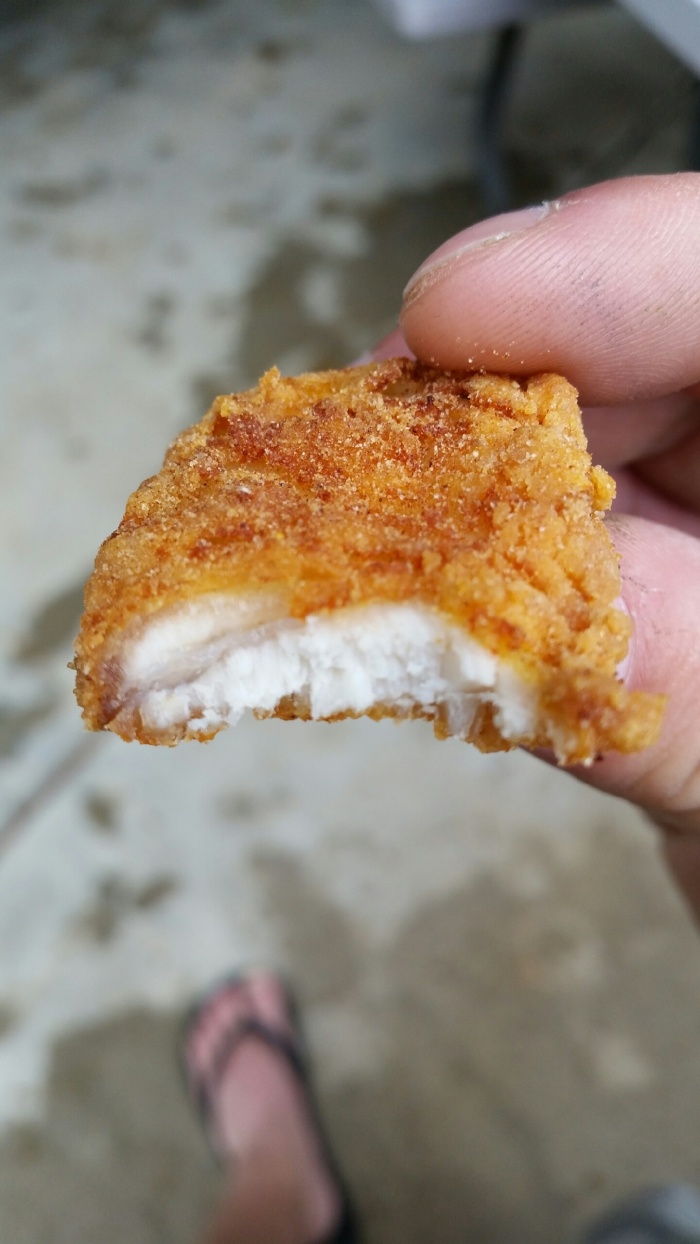 On second thought…. It tastes terrible.  Don’t bowfish for Alligator Garfish.  Leave them all for me and Joel to take care of.

If you want to see a delicious recipe with this fish, check out Grilled Alligator Garfish Recipe.

Like Loading...
‹ How to Set Up A Compound Bow At Home (Diamond Archery’s Prism)
Grilled Alligator Garfish Recipe ›