Home › hunting › Pheasants in the Snow

Pheasants in the Snow

A co-worker of mine, Craig East, decided that a few days after Christmas, he and his son, Dylan (age 11), were going to fly up to Montana to make a pheasant hunt.  Now this isn’t the kind of pheasant hunt that you’ve pictured in your mind.  There would be neither a guide, nor pointers, not even a spaniel or two.  Nope, this would be a do-it-yourself (DIY) winter hunt, with no dogs.  No waiter to lay your napkin in your lap as he serves your entree after the day’s hunt has concluded. The only thing that Craig and Dylan had going for them was that this was a hunt on private land, so they would have to compete with the game, and the elements, but not other hunters. 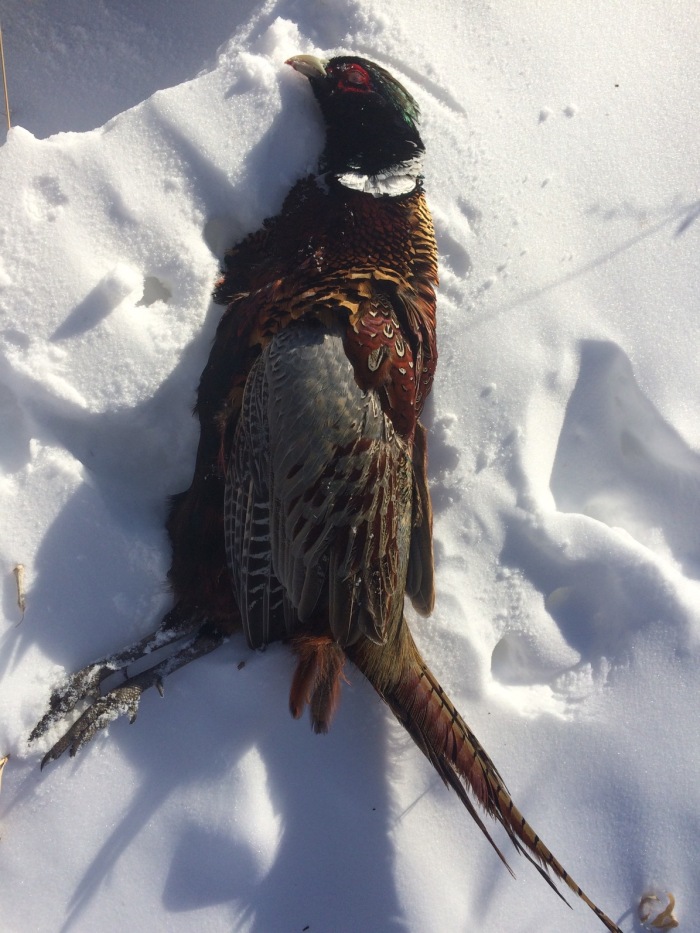 In the spirit of all things that hunting used to be, and still should be, members of Craig’s family invited them to fly up, stay with them in their home, and hunt on their land.  In exchange for the hospitality, Craig cooked them some exquisite Cajun cuisine.  Mama taught him right, and he acted just like a good ‘ol boy who grew up in Lafayette Parish, Louisiana should.  If you’re from the Deep South, then you already know that many times good food and kindness are our currency.

In the days leading up to their departure, Craig stuck his head into my office, and said “Minus 17.”

“Huh?” I replied a little perplexed by the comment.  “It’s -17 F up there right now,” he said, his eyebrows having climbed so high on his forehead that they nearly met his hairline.

I said, “You’d better get more clothes for Dylan. That’s so cold it’d make a politician put his hands in his own pockets for once!”

Now, I personally don’t have enough clothing in my entire closet that would stand up to a day in the field sporting that kind of weather.  However, this is neither Craig nor Dylan’s first rodeo.  Craig, his wife, and three children lived in Fort Collins, Colorado for 16 years before moving back to Louisiana to be with family.  So, these boys know how to handle the elements.  They finally piled up enough stitches, and hopped on a flight to Williston, North Dakota.   From there they drove the 45 miles or so to Sidney, Montana where they met up with Scott and Gail Staffanson for the next 3 days of hard hunting.

The weather wasn’t as cold as the winter storm that blew through in the weeks prior, which had sustained temperatures in the negatives.  Even so, the boys had to deal with snow drifts large enough to sink an SUV which Craig somehow managed to do. However, little help from Scott, and a backhoe and they were back in business.  The temperatures where still in the teens with howling winds pushing the falling or fallen snow right at the hunters.  Despite the rough conditions, the snow fall subsided, and Dylan downed his first rooster on the first morning of the hunt. 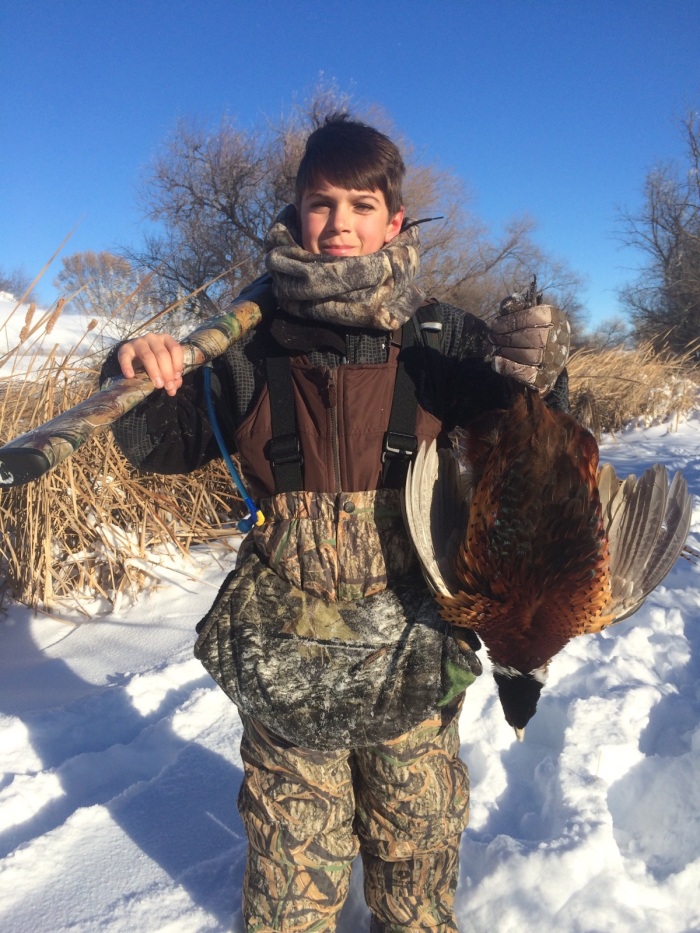 The hunting was hard, and each bird had to be worked for, but they managed to fill a limit of birds for each day’s hunt.  Their method was simple.  They sat in some reeds on a scrubby tree line between an open farm field that had been planted in soybeans, and a creek bottom that still had some water that wasn’t completely frozen.  Although winter had reduced the fields to little more than chaff, there were still birds willing to pick at the leftovers, and make the flight to water.  In the morning, the birds would leave the cover of the reeds to fly into the fields to feed.  In the afternoon, they would reverse the process.  When the birds would fly between food and water/cover, it was game on.  That’s the name of the game with any type of hunting.  If you’re positioned in a place between where your quarry is, and where your quarry wants to be, then you’re in for a good hunt.

The hard winter had taken its tole on the birds, but there were roosters to be had.  Dylan toughed out the arduous conditions, spending hours in freezing temperatures walking through knee deep snow all while remaining mentally focused in anticipation of a shot.  The two of them would walk along brush lines in order to jump up birds clinging to the smallest fragments of cover.  On several occasions, they jumped up 15 or 20 birds, only to find that a single rooster (who would end up having a bad day) was in the bunch.  They methodically trudged through  these snow covered areas day after day until the time came to return home to Louisiana.  For their hard work they were rewarded with a fantastic hunt that they’ll remember for a lifetime, yet they still managed to keep from breaking the bank.

If you have family or friends that live in far away places, look into trading them an experience where you are for a hunt near them.  Do some research to learn what kind of hunting opportunities they have near them, and get out and experience a hunt like Craig & Dylan. We live in a country that has some of the best hunting in all of the world, and much of it is owned by we the people.  More still is owned by private landowners who may not mind you making a hunt.  If you have land, then be generous and give someone a chance to make a hunt or two. 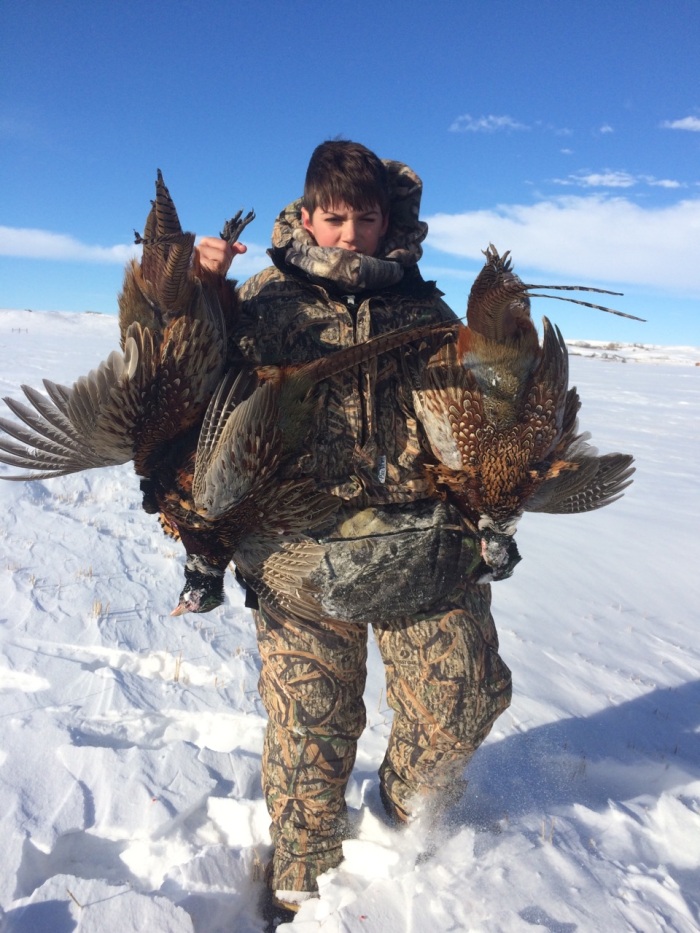 Some photographs, and a few full bellies is not what this hunt was all about.  This was a chance to hunt in conditions that are alien to a hunter from the South.  It was about experiencing the outdoors with family, and a young hunter.  A chance to teach him that the only things that are worth having in this life are the things that you have to work the hardest for.  A chance to show a young person that life is not a video game.  A lesson that at the end of a long walk trudging through thick snow, braving freezing temperatures, and fighting nagging thirst and hunger, some rewards can only be earned, and never given.  On this occasion that reward just happens to be wrapped in beautiful plumage, can fly like a WWII ace, and tastes pretty darn good.