As you know the premise of this blog is for regular people to enjoy the outdoors on a regular guy’s salary.  Now translated into the language of my people, Redneck dialect:  “We like to do cool stuff for cheap that don’t suck.”  In connection with the blog, and because I want to do things in my free time that are freakishly awesome, I wanted to be able to gain access to a few opportunities in parts unknown that can only be reached by pirogue or mud boat.

With the assistance of a mud motor, I could access better duck hunting, gator hunting, fishing, spelunking & crawfishing… the list goes on and on (okay, maybe not spelunking).  In addition, a mud motor that runs on a lawn mower engine is easier for me to maintain myself as apposed to me having to pay someone to do maintenance on an outboard (which would end up constantly clogged with mud, grass, and the body parts of my victims).  Bottom line, if I don’t want to have my happy stolen by thick patches of mud, water hyacinth, and alligator grass, then I need a mud motor like bird poop needs a freshly waxed sports car.  So, I priced a new mud motor with an engine ranging in horsepower from 6.5 to 9 HP.  And guess what?…Yeah, that crap just ain’t gonna happen.  It would run me anywhere from roughly $2,000.00 to $2,400.00 before taxes!

Being a cheapskate by nature, I started looking at the design of the mud motors themselves, and realized that they shouldn’t cost all that much after you break them down to their parts. I decided that there must be a cheaper alternative.  So, I got started figuring out the best way to begin building my own.

Deciding on The Method:

First, I priced the materials I would need to build my own.  I usually tend to have the “I can do it better myself” attitude with most things (which inevitably teaches me bountiful humility).  However, along the way I discovered that there were kits available for purchase that required no welding or fitting of parts. The kits didn’t cost all that much more than what the materials needed to build one would cost, depending on what you plan to use.  Plus, the kits are almost guaranteed to be of better quality than I could build on my first try, in addition to being accompanied by some form of warranty.  I still may want to build my own in the future, but I’m not looking to reinvent the wheel here.  As Mrs. Greatoutdoordinary reminds me, I’ve got enough projects! I’m just looking to have a running mud motor on a budget.

So, Which Mud Motor Kit?:

When I did an internet search I kept coming up with the same three outfits in the United States that provide mud motor kits.  All three are imported from Thailand, so on the outside they looked to be very similar.  However, the purpose of this series of articles is to show the reader the differences between these three kits so that the consumer can have an unbiased review of the three choices facing that U.S. (or international) consumer.

Arranged in the order that I received a kit for testing, the three long tail mud motor kits are as follows:

I sent an email to Beaver Dam Mud Motors asking if I could talk to someone about reviewing one of their mud motor kits.  Almost immediately I got a response from Robert Milner, the owner of Beaver Dam Mud Runners, who is a United States distributor of the Thai company, CLP Long Tails.

We ended up on the phone.  I talked to Robert about my blog, and that I wanted to review products for hunters, anglers, and outdoorsmen who are looking for a motor that is high quality, but doesn’t break the bank.  It wasn’t long into the conversation before Robert casually blurted out “I’ll just send you a kit for you to try out for your blog.” He was humble, but sure enough that the kits that Beaver Dam provides are solid, and constructed of superior materials when compared to his competitors.

So, recently the mud motor kit from Beaver Dam Mud Runners arrived in the mail after its journey from Memphis, Tennessee.  While doing my research and before contacting the company, I saw pictures of the product online.  When it arrived, the first thing that I noticed was how solid and heavy duty the materials were compared to the pictures I saw online.  The pictures don’t do any of these kits justice.  This is going to be a Beaver Dam good build!

Swamp Runner is supplying the SPS North America, Inc. mud motor kits imported from Thailand.  I sent an email through Swamp Runner’s website, and it wasn’t long before I had a voicemail on my cell phone from Jon Dobbs, the owner of the company.   My first impression of Jon was “Now this dude knows his product.”  After asking him about his product, Dobbs quickly got into the nuts, and bolts of his product like I’d darted an engineer with meth, and gave him a tinker toy set.  This dude knows mud motors, and loves the outdoors.  His history, and the history of his product are interwoven, and has become part of his profession, and personal life.  Having spent a great deal of time in Thailand as well as much time testing his own products (along with testing his competitors’ products),  gives Jon Dobbs what I call Thai Longtail Swagger.  I like to deal with a guy who is sure of his product.

He was so sure of his product that he promptly agreed to provide a kit for testing, and wasn’t even worried about the outcome.  He basically told me that he already knew the results that my review, and side-by-side comparison would reveal.  He told me that he was glad to have a chance to have an non-interested party test all three kits, and post the results.  In fact, he was so sure that he was down for whatever the blackwater swamps and brackish marshes of South Louisiana could dish out.  I fully intend to go through the entire build process, and test this thing by putting it through its paces.

The Swamp Runner kit arrived a short time ago at the end of its journey westward from Palmetto, Florida to rest along side the Beaver Dam kit, and ready for duty.

Swamp Skipper supplies kits to the U.S. market for the Thai company KKK.  Not your jovial, hooded, cross burning variety, this is the other KKK.  Apparently KKK in Thailand has a different meaning.

Anywho, I sent an email to Swamp Skipper inquiring about doing a review on their kit, and they replied back promptly.  They were very cordial, but informed me that they could reach more people for less cost by advertising on facebook and they don’t have to loose the cost of a kit for that.  Frugal…I like that, however I was quickly informed that I was not going to be eating at the cool kid table at lunch.  With my tail between my legs I purchased one of their kits from ebay, and after a few magic words, and a UPS driver with really sexy shorts, I now have all three of my long tail mud motor kits in my possession and ready for review!

Next, I purchased a horizontal shaft 6.5 HP Predator 212cc engine from Harbor Freight that was on sale for $99.00 (plus tax). I think the regular price is around $120.00 or so. I helped a friend out with some gunsmithing work, and he gave me a $100.00 gift card, so the engine was “free to me.”  Even though the circumstances (of me being cheap) practically made the decision of which motor for me, it turned out to be a great choice for an engine for this build.  I will have to buy 2 more engines to make this a trio for the comparison, so the engine being cheap is a good thing. 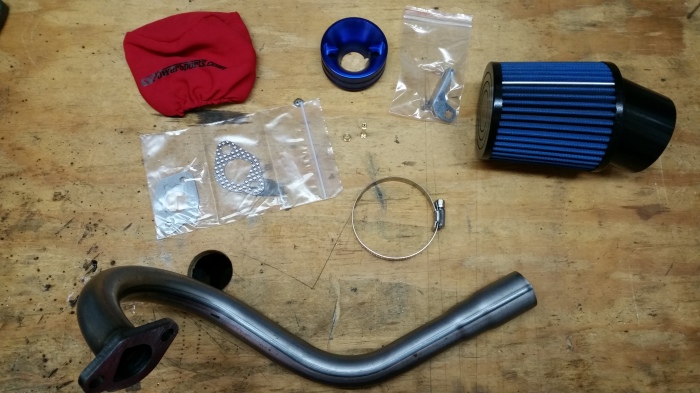 While geeking out every detail for this project, I came across scores of videos on the internet of people modifying their Predator 212 cc for use in Go Karts.  A light bulb went off in my head, and I thought…“I need a beer!”  After I drank the beer, I had another thought…“What if I used the Go Kart Mods on my mud motor engine to get more POWER!?”
and “I need another beer!”

The popularity of the inexpensive Predator engine turned out to be a good thing because there was a ton of information out there.  I found a company Go Power Sports that sells parts specifically designed to take a 6.5 HP Predator 212cc engine and sprinkle it with Kung-Fu dust, thus upping the horsepower to 9 HP (according to the Go Kart Jedi, Tim Yochum).  The “Kung-Fu dust” is actually a kit they sell called the Deluxe Predator Performance Kit.  This kit will bump up your HP by roughly 2.5 horses.  That’s cheaper than buying a larger engine from the get-go, and also gives your motor a little swagger as well without added weight.  All the ladies be like “we wanna ride in yo duck boat.”

I contacted Go Power Sports, and it wasn’t long before I was contacted by Tim Yochum (like Dwight, but without the cool hat, and I think the country music star spells it Yoakam, but I digress).  I explained what I planed on doing with the mud motor kit, and the Predator 212 engine, and he sent me the performance kit to try out.

PREDATOR 212CC after all of the Mods

To see the transformation from the factory engine to the modified Predator 212cc, and the video on how to do the mods, see Predator 212cc Mods – Go Power Sports Kit.  It was very fun, and is something that anybody can do.  You don’t have to be a wrench wielding ninja to make this happen (trust me…I’m not a wrench ninja).

I can hardly wait to let the games begin, may the best long tail mud motor kit win, may the odds be ever in your favor, let’s get it on, bring the pain!…Whow! All fired up.