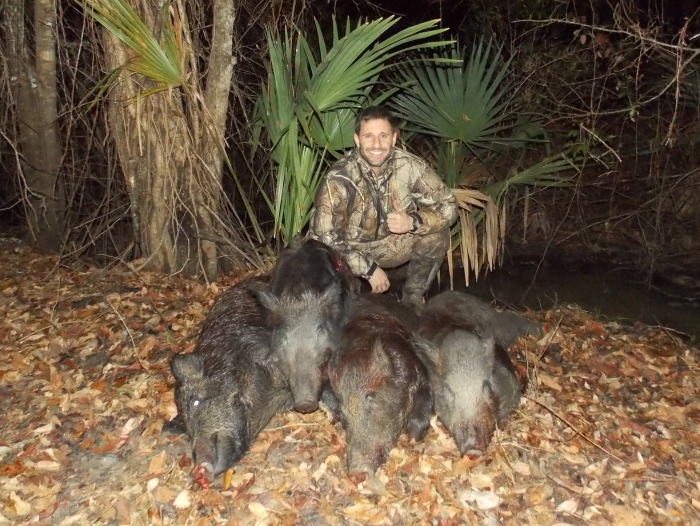 Take a hunter who has never killed a wild hog, a rifle powerful enough to take some of Africa’s most dangerous game, two heavily baited shooting lanes, and smash all that in the calm between two South Louisiana rain storms, and what do you have? The worlds most satisfying game of Wild Hog Whac-a-Mole!

A friend at work by the name of Brent Domingue has been hunting over the last few years, yet never had the good fortune to take a deer or hog.  Plenty of scaled, aquatic creatures, as well as feathered, winged beasts have fallen by his hand, just not any of the crepuscular quadruped variety.  While loitering around the proverbial water cooler at work one day, I began reliving some flamboyant tale of one hunting escapade or another.  Apparently the office water cooler/coffee pot has become the modern caveman’s camp fire.  Anyway, Brent mentioned that through several unavoidable misfortunes, he never could seal the deal on a deer or hog.  I asked if he would like to make a hunt, and he jumped all over it.

If you want to kill everything you shoot at and whatever may be standing behind it… 270 grain 375 H&H….accept no substitutes!

After careful consideration on what weapon to bring, Brent decided on a Thompson Center rifle chambered in .375 H&H because why the hell not, right?  It was primitive firearms season here in South Louisiana, so with this rifle he would be able to shoot deer or hogs.  A few days before the hunt, I dispersed 150 lbs of corn, and an additional 50 lbs of rice bran in the two shooting lanes that the stand provided.  Why leave things to pesky ol’ chance, huh?

The exit wound left by the .375 H&H bullet.  It looked like Miyamoto Musashi came through with Katana leading the way.

And speaking of leaving things to chance, the choice of caliber worked out perfectly.  The conditions were terrible for tracking.  In their zombie like quest for sustenance, the hogs literally leave hundreds of tracks in the black-jack clay soil, so following the tracks of the hog you just shot can be quite a challenge.  In addition, it rained so much in the days prior to the hunt that the palmetto thickets surrounding the two shooting lanes held ankle deep water.  Following a blood trail at night through a flooded thicket while looking for a wounded hog ain’t what I would consider ideal.  Thus, the overkill of the 375 H&H loaded with 270 grain Hornady SP-RP was starting to sound great! According to Hornady’s website:

SP-RP stands for “spire point – recoil proof,” and the design of this bullet eliminates the problem of tip deformation during recoil. These heavy-duty InterLock® bullets combine rugged design with improved trajectory in dangerous game rifles.

According to Greatoutdoordinary’s website, all of that translates to “hogs die with extreme prejudice!” 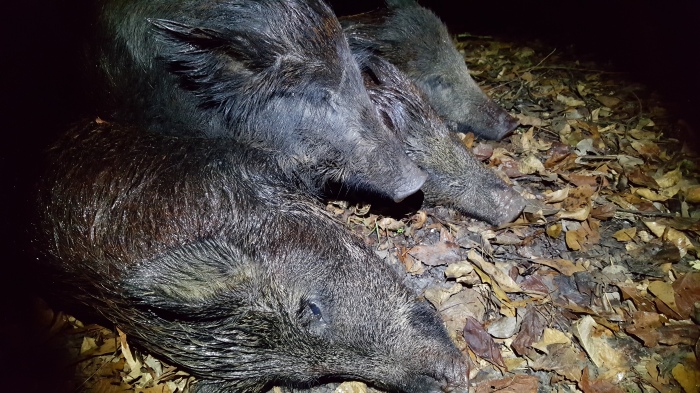 The timing of this hunt worked out perfectly.  We both had time free, I was able to pre-bait the stand, the wind was perfect, and we would be hunting directly between two winter rain storms.

I showed up just before Brent arrived, and was able to dump out another 100 lbs of corn down both shooting lanes. The sign was so diverse, and plentiful that I texted Brent “You are going to kill something today.” When baiting in the days prior to the hunt, I cast the corn out all over the shooting lanes like feeding chickens to make the hogs work for every kernel of corn. But this time I poured the corn right down the middle of the shooting lane in line with the stand. This was done in an attempt to get the hogs to line up at the feed in a way that would present a broadside shot to the hunter, and hopefully they would line up for multiple kills with one shot.

Brent suited up in his blaze orange killing suit, and we made our way to the stand.  On the walk to the stand, we jumped a sounder of 3 small hogs, but couldn’t get a shot.  We made it to the stand, and came up with a few “what if” plans for different scenarios.  I began walking out to take my position at another location.  I made it about 150 yds, when…BLAM! I nearly jumped out of my skin from the report of the ported barrel of the .375 Holland & Holland claiming it’s first victim.  Hell, I could still see him in the tree!  It happened so quickly that I was worried that Brent had an accidental discharge. My phone rang, and it was a breathless Brent Domingue. 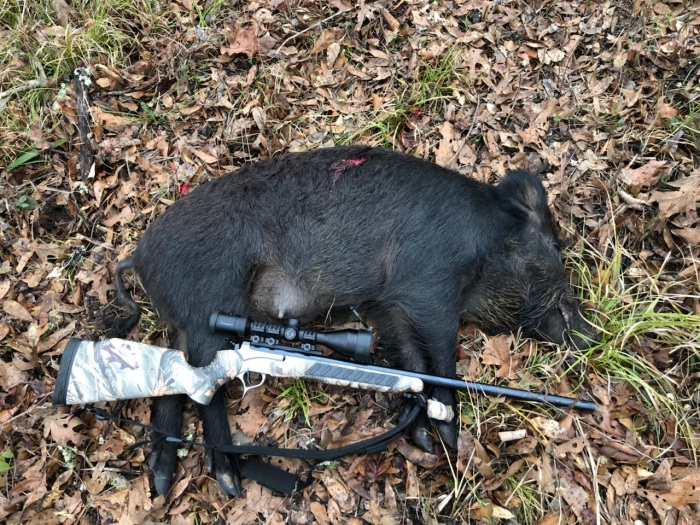 “It did a flip, and never moved after it landed!”

“I just shot a big black pig!” He said like a kid at Christmas.

“It did a flip, and never moved after he landed!” He could hardly contain himself. I made a mental note to thank whoever Holland & Holland was for not making me blood trail.  It was cool and early, so I told him to keep stacking ’em up.

I got to my spot, and BLAM! The report from the fire breathing rifle sounded again. Brent texted “I had two tiny ones lined up, and I got cocky. I think I missed.”

It turned out that the rifle was shooting a little high at closer range.  Brent figured that out on these tiny corn eating targets. Hogs kept coming out of the thick palmettos, and Brent would send a round, knocking them down like a game of Wild Hog Whac-a-Mole. BLAM!…20 minutes…BLAM!…40 minutes…BLAM!  It sounded like a firing range. I told him that if he could see a hog to take a shot because there numbers needed to be reduced. He had 7 bullets to start, and returned home with 2.

We cleaned the hogs on my tailgate

When the sun began to fall, I made my way to him on Brent’s four wheeler.  I called him to ask if I was going to run over a blood trail, and he said, “Nope, you are about to see the first one.”  What I witnessed next was dead hogs littering the shooting lanes, all having an estimated weight of between 100-150 lbs! They ranged between 200 yards to roughly 75 yards, and wherever their hooves where when the 270 grain bullet impacted them became their final resting place.  Brent exhibited some great marksmanship! 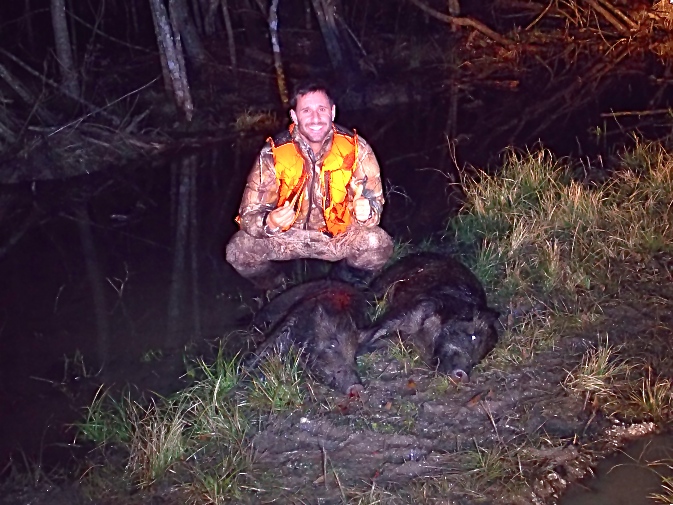 Brent’s last shot was on two sizable hogs that were standing in the broadside position that we’d hoped to produce with my bait position.  He made a perfect shot on the first hog.  The bullet traveled through the first hog, and the second hog, stopping on the hide of the second hog!  The bullet traveled through both hogs, and still had enough killing power to put both hogs down at a range of roughly 100 yards.  In case you were wondering, yes it was on purpose (not just a lucky shot).  In one shot, Brent had taken twice as many animals as he had taken in the past several years of hunting!

Bullet resting against the hide of the 2nd hog after passing all the way through it.

In the end, we recovered 4 hogs, and had a muddy, bloody, messy good time.  We cleaned the four hogs on the bed of my truck, and managed to fit all of the meat in Brent’s K2 cooler.

Behold, the Domingue Swine Massacre of 2018!

All in all, I was glad to be there when Brent had the good fortune to take his first “big game” animal (even though wild hogs are not technically a game animal in Louisiana).  I had a blast, and judging by the excitement level, I have a feeling that we all will be seeing more of the adventures of Mr. Brent Domingue on this blog.

Successful Hog Hunt with a .375 H&H in South Louisiana