These are pictures of a 110 grain Barnes TAC-TX bullet fired from a 10.5 inch Noveske barreled .300 Blackout (.300 AAC), after having passed through a roughly 150 pound wild boar hog.

The pictures are courtesy of my brother-in-law, Doc.  He took some macro pictures of the projectile fired in the post Dr. Death & the .300 Blackout. Check out the article to see how it preformed on an animal in field conditions out of his .300 Blackout pistol.

I think we will be doing some more testing of this bullet in the future. 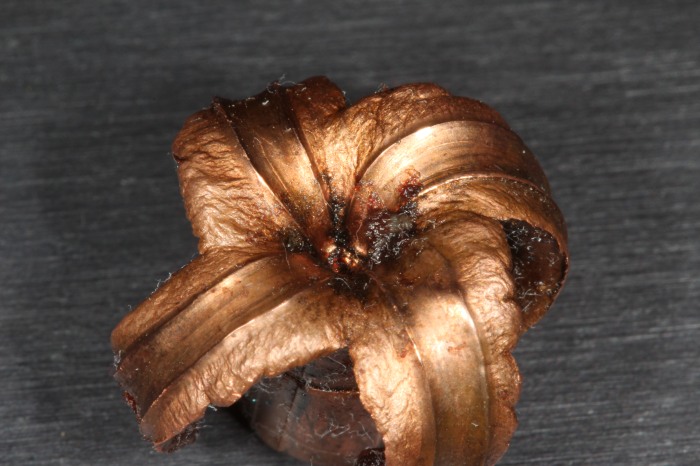 The white fuzzy stuff is pocket lint from Doc’s pocket. 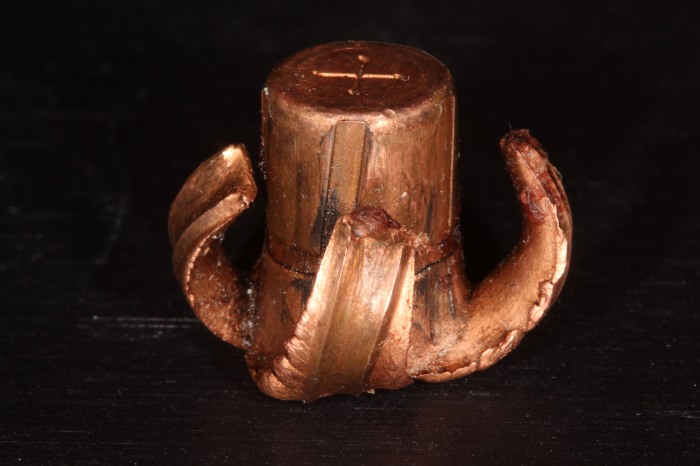 As you can see, this bullet expanded exactly as it was designed.  Barnes designed this bullet to expand to twice its original diameter by deploying its copper pedals at lower velocities than the other all copper projectiles it offers.  This makes for a great hunting projectile to fire out of an SBR or pistol.  This particular round was a factory loaded Barnes Vor-TX chambered 300 AAC Blackout in 110 grains.

The round opened up fully by the time it passed through the boar hog’s “shield” resulting in the wound channel nearer to the entry wound (where the bullet passed through the near side ribs) being as large as the exit wound on the other side.  The internals were destroyed, and the bullet lodged on the inside of the hide on the exit side.  The blood trail was good enough to have been followed by Ray Charles on a dark night.

I know that one experience is anecdotal evidence, but all I know is that a wild animal was shot, easily tracked, and was deader than disco in a honky tonk when we got to the end of the plentiful blood trail.  At the end of the day, that’s what its all about boys.

Proof’s in the puddin’