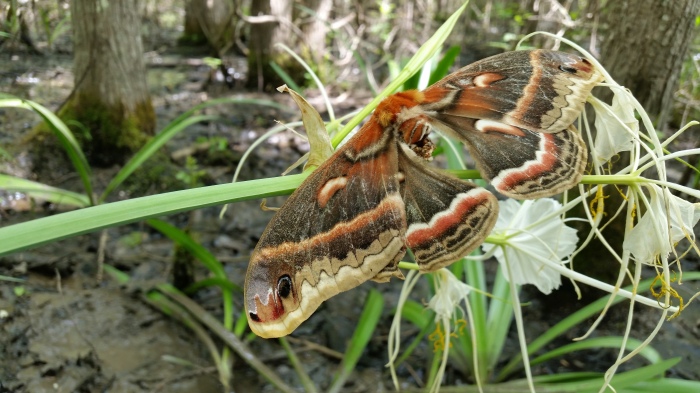 From the family Saturniidae, the Giant Silk Moth is a sight to behold.  Last April I was walking through a small swamp checking for hog trails to begin setting traps, and I spotted a bright patch of color through a break in the trees.  As I walked closer, I noticed a moth the size of a bird resting on a swamp lily.  I got closer, and fully expected it to fly away, but it remained.  Only upon closer inspection did I realize that it was quite dead.  The moth was so large and had such alluring colors that I couldn’t help but snap a few pictures.  Here I am trudging through mud, dripping with sweat, in a stinking swamp, with the contrasting beauty of the moth and swamp lily which made for an intriguing scene.

This particular species of moths are interesting little guys.  Giant Silk Moths (Saturniidae) are among the largest species of moth.  They start out as an egg, then larvae, then pupae, (you remember this from 4th grade science class) and finally as an adult.  The nocturnal adults don’t have mouth parts that are capable of eating food, so the adult moths never eat.  Weird, I know.

When they become adults, the female puts off a pheromone that the male tracks with his huge fuzzy looking antennae.  The male is said to be able to locate a female up to a mile away.  Kind of like a guy from New Iberia with Natty Light.

At night they attempt to locate each other, and do the freak nasty before they both croak from starvation.  Heck of a life, huh?  In the first stage (egg through pupae) they eat like John Candy (we miss you homie) at a pie eating contest, and the second stage is like Tirso de Molina’s Don Juan.  Baw-Chicka-Bawaw!  Anyway, this creature must have huffed himself out, and happened to die on this beautiful flower. 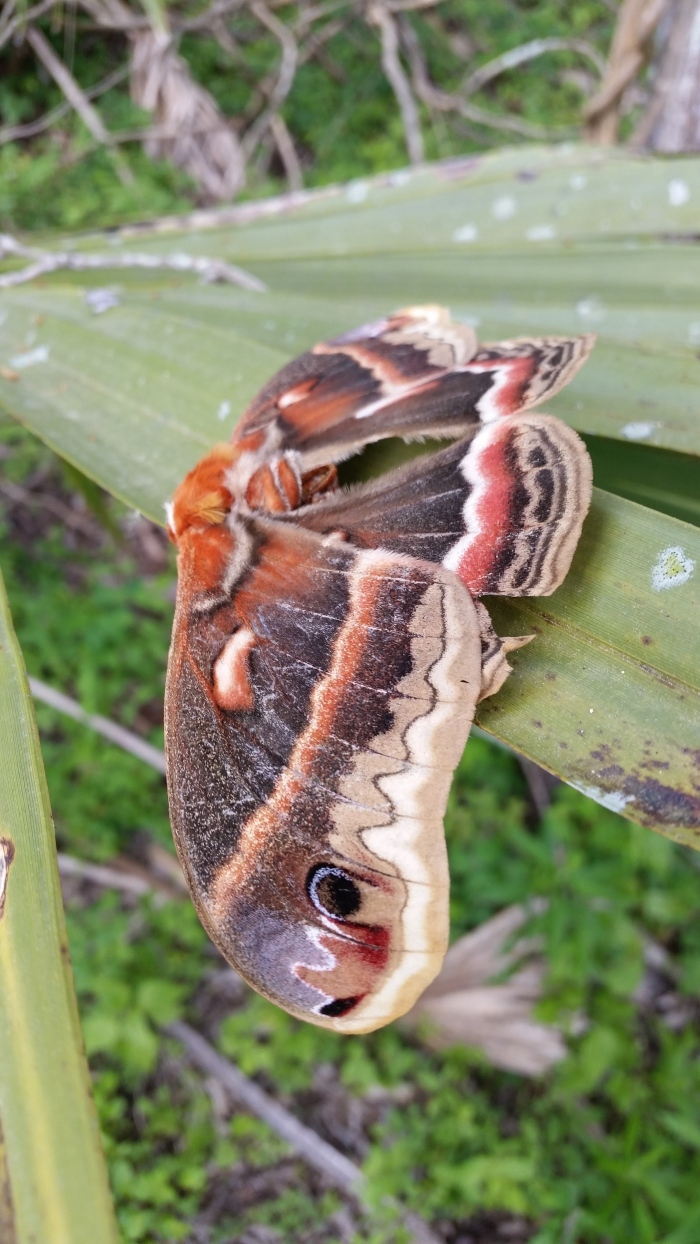 I moved the moth to a piece of palmetto to take this picture.

While hunting in another part of Louisiana (North of I-20), I came across what I believe to be a Saturniidae cocoon.  Ironically, I took the cocoon pictures almost a year to the day from this post. 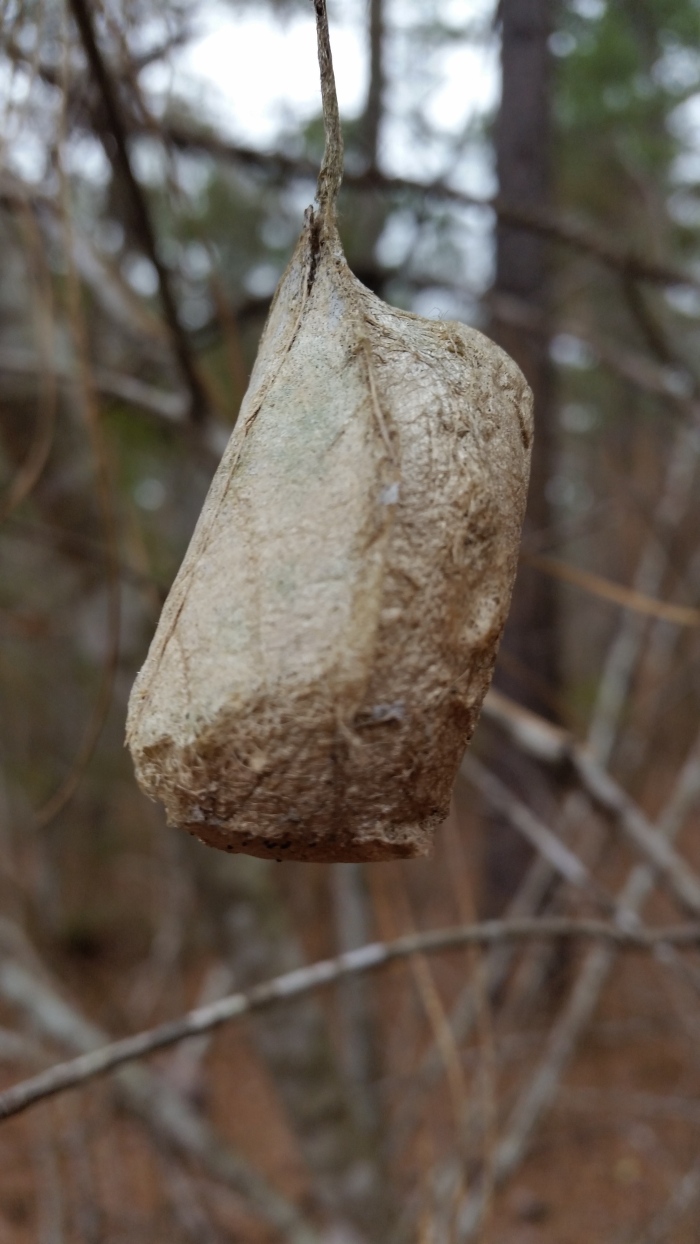 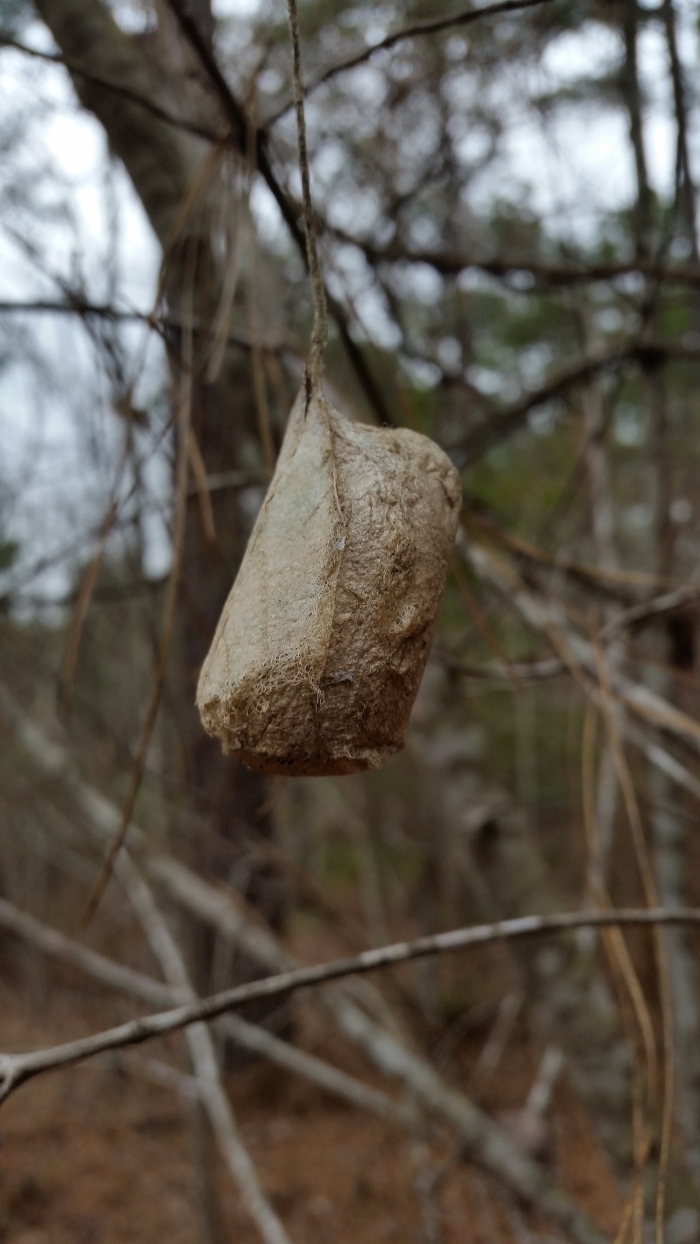 I’m not sure if the one I found is a male (which is easy to distinguish because they have huge fluffy antennae used to sniff out the females), or a female, because the antennae had already fallen off.  Either way, it was a neat find, and an interesting part of nature.

Here’s to you Giant Silk Moth…you really know how to have a good time. 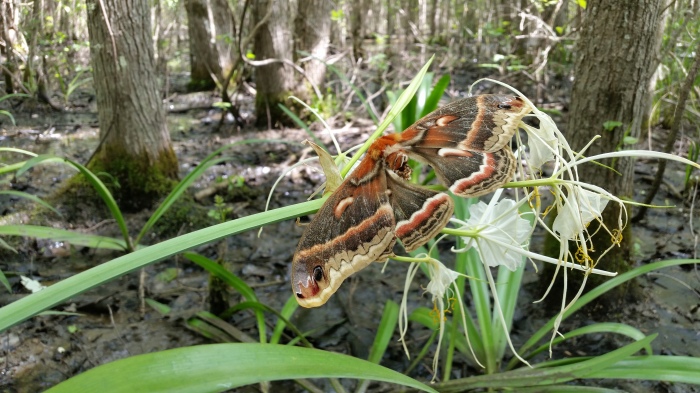