Home › hunting › Choosing a Hunting Rifle Caliber for a Child

Choosing a Hunting Rifle Caliber for a Child

As rifle hunters we’ve all been there.  The age old question…“What caliber is the best for hunting?”  More specifically, “What is the best rifle caliber for a young hunter?” I am nowhere near arrogant enough to even attempt to answer that question.  However, I can add some observations that I’ve noticed over the years.  This topic will focus on whitetail deer, and hogs at modest distances of 200 yards or closer because I feel it to be a realistic hunting distance for a child from ages 8 to 17 years.

When I hit the woods many years ago with my father, the first firearm with which  I deer hunted was a side-by-side 20 ga, loaded with 00-buckshot.  It was quite effective, but limited in yardage to roughly the distance I consider slam dunk bow range these days.  For a child of 9 years, it also kicked like a drunk mule. To this day, I call that gun my “Elmer Fudd Special.”

For a short time, my father tried a Japanese SKS, chambered in 7.62x39mm.  It didn’t kick, but wasn’t very accurate, the trigger was garbage, and the rounds would eject into the scope, so he sold it.  After my first deer with the 20 gauge, my father moved me to a Remington 700, chambered in .308 Winchester.  I still have that rifle, and it has taken many of the deer that I’ve harvested into my early 20’s.  However, for a child, it also had quite a thump to it.  Although it did teach me the fundamentals of how to effectively absorb recoil, and proper trigger control, it was probably not the best option until I managed to put on a little more heft.  Since then I have apparently become an expert on putting on heft!

When my 11 year old daughter told me she wanted to go deer hunting this hunting season, first I wiped the tear out of the corner of my eye, and then set myself to the task of developing a method for her to effectively and ethically harvest a whitetail.  Said method would have to be lethal enough to kill a deer, yet would still function with her fairy like frame.  You see, Emma is quite athletic, but she is definitely in the feather weight category, weighing in not much more than a sack of deer corn. I would have preferred to start her out bow hunting for whitetail for several reasons, but she could not yet pull the minimum 30lb draw weight required in Louisiana nor could she shoot consistently enough for me to feel comfortable archery hunting this year (but next year its on like a pecan).

So, then my thoughts went to shotgun.  The only shotgun round that I imagine that she could handle comfortably would be a .410, which is not meant for deer hunting.  Shotgun was out from the start.

My next thought was “RIFLE.”  This opens up the range, so being winded, seen or heard by a deer was less likely.  I also knew that for at least the first season there would be coaching from dear old dad.  Thus, we would need some distance so we could move and communicate prior to the shot.  The use of a rifle also packs quite a punch into a small package when compared to archery, or shotgun, yet the recoil can be quite well managed with the right caliber.  So I did what I always do…I geeked it out pretty hard.  Consider the following:

If using a 5.5 lb shotgun having a .410 bore, 3″ shell with 11/16 oz shot weight, traveling at 1135 fps, will have a recoil energy of 10.5 ft. lbs.  As mentioned earlier, this is not an effective hunting option for deer in my opinion, but I included it for comparison purposes.  Some of your youngsters may have already shot a .410 at small game or for wing shooting, so it is a useful comparison when dealing with recoil energy and a frame of reference for what your munchkin could handle comfortably and effectively.

By comparison, a 6.8 SPC shooting a 95 gr projectile at 2950 fps, with a rifle weight of 7.5 lbs only has a recoil energy 7.56 ft/lbs.  This cartridge is quite effective on whitetail, and when fired from an AR-15 platform the gas system will reduce some additional felt recoil when compared to a platform that does not utilize a gas system (i.e. bolt action, single shot rifle, etc.) At the yardage mentioned above (0-200 yds) it is relatively flat shooting as well.  For the size and weight of the rifle, it packs quite a punch.

A 7.25 lb rifle chambered in .243 Win, shooting a 95 grain projectile at 3100 fps, will yield a recoil energy of 11.0 foot pounds.  The venerable .243 Win has been the hunting cartridge of choice for generations of youngsters, as well as adults.  This is for good reason…it is awesome. It’s flat shooting, effective on whitetail sized animals, and the recoil is less than many other common cartridges.  However, it has 3.44 more ft/lbs of recoil energy produced when comparing the same weight of projectile, and only yielding an additional 150 fps over the 6.8 SPC (as loaded).  Another negative is that I don’t own a .243 Win, and the IBOD (the International Bank of Dad), did not approve funding for additional rifles this year.

I do, however, own a 6.8 SPC upper for my AR-15 (which I inexpensively assembled myself), and it’s ready to rip.  Make no mistake, I built this rifle for daddy.  It just so happened that when going through my mental Rolodex of rifles, this one stood out as a possible candidate for an effective youth rifle.  We went to the range for a few sessions, until my daughter felt comfortable shooting it out to roughly 100 yards. The fundamentals of shooting a rifle are the same as with any activity that requires accuracy.  When a shooter is comfortable, that shooter will be more accurate.    This is true of ergonomics (fit), recoil, noise, or draw weight in archery.  If these things are addressed you will be more accurate, and thus you will kill more things.  If you can’t place the shot effectively, then you are doing yourself and the animal a disservice, even if you are shooting a magnum cartridge.  Also, know and adhere to an effective shooting distance (regardless if you are using a firearm, archery, throwing darts, whatever.) As much as we would love our kids to be able to, don’t expect your child to pick up a rifle for the first time, and preform like Chris Kyle.  Another thing to consider is the added benefit of using the AR-15 platform in a carbine configuration is that it allows for an easy adjustment of the stock to fit a child.  I am easily twice my daughter’s size, and we were able to switch back and forth on the shooting bench with only a few clicks of the stock, neither of us having to sacrifice proper fit.

The outcome with the AR-15 chambered in 6.8 SPC II used as a youth rifle:

In four hunts, and with a goal of getting animals from 60 to 100 yards, we were able to first harvest a wild hog, then her first whitetail (a 7 point), then her second whitetail buck (9 point) this hunting season.  Due to shot placement, and the effectiveness of this cartridge, we had two DRT (dead right there), and one very short tracking job of 25-30 yards or so.

To see a video of Emma Kate taking her 7 point with this rifle, CHECK THIS OUT.

The 6.8 SPC II has preformed well this year, and every time I pull a pack of meat out of the freezer, or a ham out of the smoker, I give that rifle a little tip of my hat. 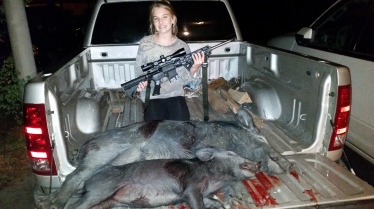 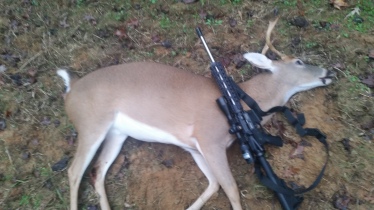 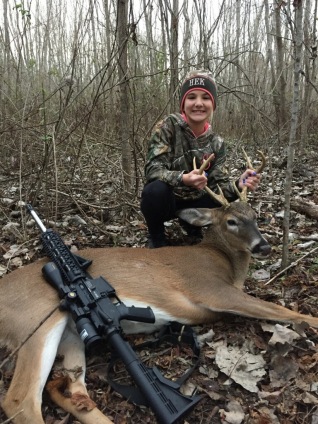 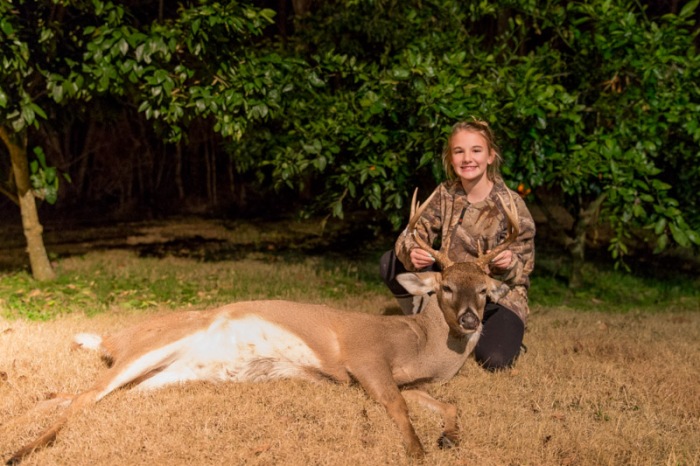 Now we’re working on my daughter harvesting a deer with a bow next year, so the research begins anew!

Like Loading...
‹ How to Cape a Deer for Taxidermist
The Giant Silk Moth (Hyalophora cecropia) – Nature’s Party Animal ›