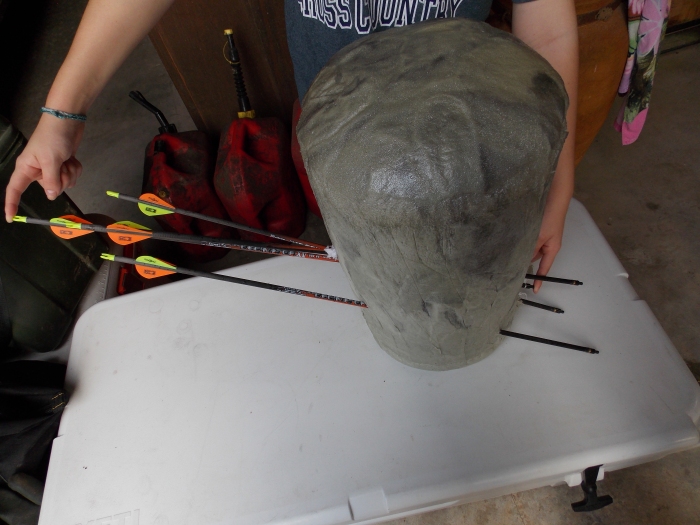 I’m cheap…There I admitted it.  I’m freaking cheap! If you manage to talk me out of my money, it is because you are either a great con artist, or because you sell a quality product.  That being said, I don’t like the idea of spending $200 or $300 on something that I’m going to destroy with arrows!  Especially since I shoot traditional gear, and my daughter (currently) shoots a low poundage compound bow.  I don’t need something that will stop an arrow going the speed of sound!  However, I’d like to be able to build a target that will stop arrows out of your average 70 pound compound bow.

I was looking for something that could fill my 3D targets, but wouldn’t cost me an arm and a leg.  I’ve used the canned insulation (Great Stuff) in the past, but it isn’t dense enough to stop arrows consistently, and it can actually be kind of expensive if you’re doing a large area.

I came across a series of products designed to take the place of traditional cement when sinking fence posts.  You dig your hole, mix a 2 part foam, then pour it into the hole with the post, the foam expands, and hardens holding the post in the ground.  It looked to be more dense than the foam from a can of Great Stuff, so I picked some up at my local hardware store.

The specific product I purchased is made by Fast 2K, and it retails for anywhere between $15 – $25.  The reason I wanted this pack is because the pack said that it is the equivalent of 2 sacks of concrete and the others were just 1 sack.  I figured what the hell, right?  If it works, I can repair my 3D targets (which don’t have replaceable inserts like some models), instead of having to purchase an entirely new target.  If it doesn’t work, then I’m out $15.

First things first, would it stop an arrow?

I wanted to pour it somewhere, and try it out before I started cutting and pouring into my 3D targets, and having my arrows fly through the target and into the neighbor’s siding.  Surprisingly enough, they frown on shooting arrows into your neighbors’ house in this neighborhood…some freaking people, huh?

How to Make the Target:

So, I decided to pour this stuff into a 5 gallon bucket, that I lined with a simple trash bag…only the most high tech stuff on this blog!  Note that when the foam begins to cure, the chemical process creates heat.  It wasn’t enough to melt the plastic bag or 5 gallon bucket, but just keep this in mind when using this product.  Below is the video of the process:

My daughter named the target Bobby-Joe.  This one container filled the 5 gallon bucket just over full, so it would be plenty enough to do the kill zone on at least 2 deer or hog sized 3D targets.

My daughter set up in a 12 foot tree stand at a distance of 15 yards.  She was shooting her Diamond Prism with a draw weight of 35lbs.  The first shot was with her “heavy setup”: 500 spine 27″ Victory carbon arrows with 100gr brass inserts, with 125gr field points.

The second shot is the same arrow setup but with a standard insert.  After the 2nd shot, the remaining shots are all “heavy setup” arrows (same as the first).

Would I use this again?

Low Poundage Compound:  Maybe for my daughter’s bow as set up above, but the foam doesn’t “heal” like the foam on 3D targets.  So, after repeated shots, I could see it losing it’s ability to completely stop arrows effectively.  It worked well at stopping the arrows with field points, but I would not use it with broadheads.

Medium to High Poundage Compound Bow:  Nope!  I think you would have arrows flying right through this thing.  It may stop some arrows, but as soon as you hit the same part of the target multiple times, you would be sending an arrow into Wilson’s fence or Fido next door.

Traditional Bows:  Although I didn’t take a picture, I did shoot it with my 50lb Fred Bear Recurve, shooting 500 spine arrows with 200 grain field points (I get pass throughs regularly on deer with this setup if I stay out of the shoulder), and it did stop my arrow before it got to the fletching.  But I won’t be using it for a target.  Maybe I will use it as a backstop.  I may be able to shoot into it longways instead of shooting through the thinnest part of the target as we did in the video.

Higher Poundage Traditional Bows:  Not recommended.  I think a stronger poundage trad-bow, or the right heavy arrow setup would blow through this thing.

Another negative is that the target is very light weight, so you need to add some kind of weight to the bottom or secure it from the top in order to keep it from tipping over when shot.

I would love to try to use different media mixed in with the foam to try to either:

Bobby-Joe served his purpose, giving me a project to tinker with, and it did stop arrows out of my daughter’s low poundage hunting setup.  She will be able to use Bobby-Joe to practice with this year.

However, I will not be using this foam as is to fill my 3D targets because I don’t feel that they are effective enough to consistently stop arrows.