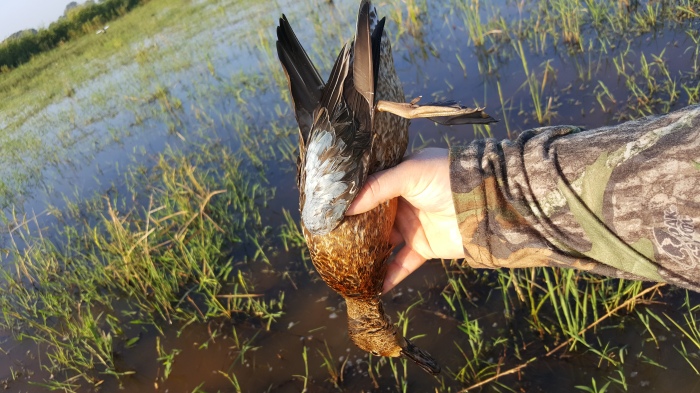 September is a great time in Louisiana.  Hurricane season is nearly over.  Everyone’s football team has an entire season to win a national championship, or the Superbowl.  Hunting season is juuuuuust beginning, and this might be the year that you get that buck, or bag that limit, or whatever your hunting heart desires.  This might be the best year of your life!  September in Louisiana means Doves, Alligators, and Teal.

I was lucky enough to make a white winged dove hunt in West Texas this year, and made some mean Dove Enchilladas.  I got to have a blast with old friends in Alligator Hunting – The Three Amigo Alligator.  Finally, in order to experience the third leg of the September Triathlon, Doc was kind enough to invite me on a teal hunt.

The Sights and Sounds of Early Season Teal:

If you’ve ever had the opportunity to make a September teal hunt in South Louisiana, then you know the sights and sounds.  The smell of the mud in a flooded rice field or favorite marsh.  The pastel wisps of color with the pre-fall sunrise reflecting off of a flooded rice field.  The rhythmic tapping of a flapper decoy’s wings. The rustle in your ears of the seemingly endless wind rattling over the expanse of agricultural fields or marsh ponds.  The tiny teal decoys bobbing in the water among the green rice shoots or wigeon grass.  Untouched by the coming frosts, the levee grass is still vivid green, and the marsh grass has yet to be flattened by the trampling boots of careless hunters and their K9 companions.  The best part is that the birds are still as dumb as a post.  Yet despite all of the sensory wonders, it wouldn’t be an early season teal hunt without Louisiana’s most numerous residents….mosquitoes!

No teal hunt would be complete without the sound of whistling wings.   This is the sound that rabid waterfowl hunters have been dreaming about throughout the long spring and summer months.  The unmistakable hissing of these cinnamon, blue, or green winged fighter pilots conducting their aerial acrobatics.  They contort their slight bodies in such a manner as to successfully land a decoy dive bomb run all while bending the laws of physics at 40 mph.  They move as one.  A cohesive group like a school of flying fish.

As they approach you feel the child-like excitement… It’s Christmas morning, your first date, and stage fright all wrapped into one.  Someone says the words that we’ve all been waiting for… “TAKE ‘EM!,” and its Boys-n-the-Hood meats the O.K. Corral.  For a few brief moments it’s as if the devil himself has loosened his grip on the hounds of hell, and you are that hound.  Fire breaths from the end of your barrel, wads full of hot steal reach mercilessly for their victims in perceived slow motion, as empty shells rain down among the mud and grass leaving behind the blue haze of burnt powder.  Your barrel instinctively follows the descent of the final bird from its celestial perch in the sky, following its collision course with your shot, until you see the satisfying splash of its motionless body coming to rest with a dull thud in its watery grave.

The gluttony of firepower is over. Safeties on, and with smiling faces, everyone recounts the experience, and counts the birds down.  Everyone’s nostrils fill with the humid early morning air blended with the unmistakable sulfuric aroma of freshly fired shotgun shells.

You feed your trusty shotgun a few more of the devil’s pills, as you ready for the next wave…more whistling wings!