11 Years & Nine Points – Finishing the Deer Season Like a Boss

It was a hot, humid day in January.  If you hunt in the deep south, then you know that the weather here during deer season can be anything from cold to very cold to just above 9th realm of hell. Well, on this hunt, it was the latter.  I finally talked Emma into getting on a boat, and crossing the Whiskey Bay Pilot Channel.  You see, she has a little thing with boats.  And by “little thing” I mean that she’d rather pick a fight with a grizzly bear than get in a boat.  I don’t know what it is, but everyone has to be afraid of something, right?  With me, it’s puppies…creepy baby dogs…it’s just not right, but I digress.

Anyway, the trip to the wooden box stand was pretty uneventful.  We loaded all the hunters onto a flat bottomed boat along with a 4 wheeler, and crossed the river.  We got to our box stand around 3:00 PM or so.  We were overlooking a pipeline, and a South facing shooting lane cut into the woods.  Of course, there was some variation of a South wind blowing warm jungle like air apparently carried from some dank, warm, jungle-y place on the equator right to where we were trying desperately not to sweat.  Now I must admit that under these conditions, my lily white behind would have been gracing a couch cushion, sipping on some iced libation if not for my daughter’s desire to hunt.  So, I must credit her with what happened on this hunt, because I wouldn’t have even experienced it if not for her desire to get out there.

The afternoon slipped by uneventfully, and even Emma began to get restless.  She would ask, “So, what time do we stop hunting?”  I answered, “When it gets too dark to shoot.” A few moments would pass (with nothing happening), and she said “What time does it get dark?”  This type of banter went on for a while, as we were getting texts from hunting buddies with deer under their stands, adding insult to injury.  I figured if we even saw a deer under those conditions, it would be a win.  Then, the unthinkable happened…we saw a deer.  I happened to glance behind the stand, and spotted a buck in the woods.  It crossed the pipeline to our left, but was what I call a glorified spike.  A glorified spike is a buck whose points are not strong enough to consider him much above a spike.

Previously Emma decided to fill a doe tag on today’s hunt, and refused to shoot a buck smaller than the one she’d killed in my previous post Go Ahead…Shoot Like a Girl – A Girl’s First Whitetail.  She let the spike pass, and we enjoyed watching it walk out into the shooting lane to the South, and feed on a rice bran pile at about 100 yards that was put out by her grandfather. I began taking pictures of the small buck out of boredom. 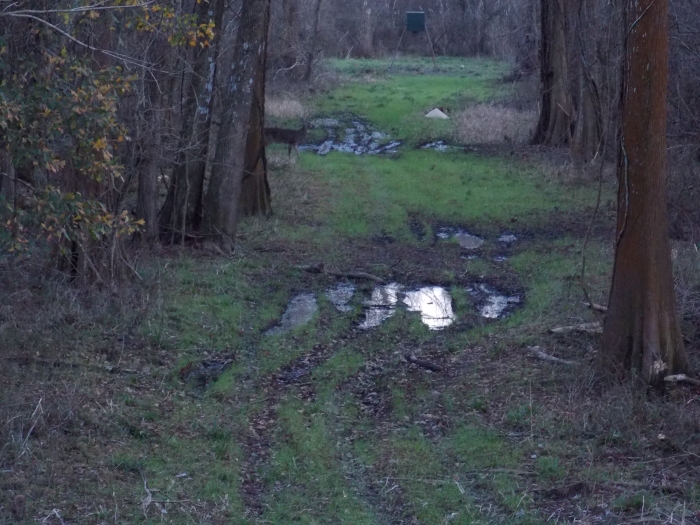 The glorified spike making his way through the bald cypress trees, and out into our shooting lane

I fully expected for a doe to step out at any time.  The feeder is about 200 yards from the box stand which is beyond her comfortable shooting distance, so I was hoping it would be a closer shot.  As the spike fed, it looked nervous, and kept nosing the wind.  I knew that we had the wind on him, and he wouldn’t be nervous if he was smelling a doe this time of year.  This is the rut for this area, so if he smelled a doe he wouldn’t fidget he would likely chase.  Likely our spike knew that a bruiser was in the area, and he was sitting on the bruiser’s bar stool.  I explained the behavior to Emma who began to scan the area intently looking for a buck (or doe) to step out at any minute. Finally some excitement!

As I watched the spike through the camera’s view finder, I heard Emma gasp.  About that time, I saw a deer step into the view finder.

She asked “Is it a doe?”  Just then, it turned its head, and revealing its head gear.  I said “It’s another buck.”

She replied, “Awe, man.  I already shot a buck.  I want to shoot a doe.”  I took a closer look using the camera’s zoom feature, and immediately said “Emma, pick up the rifle.  You want to shoot this one.”  She asked, “Is it bigger than the one I shot?”  I said, “Boo, get the rifle, or I will!”

She did.  She was able to position the rifle in the corner of the blind’s shooting window, and get a steady rifle rest that allowed for the solid positioning of the elbow on her trigger arm.  The 6 position stock on an AR-15 carbine seems to be made to adjust for a child in a hunting situation.

Solid as a rock

She sent a 95 grain Barnes TTSX screaming out of the 6.8 SPC II.  It found its mark right behind the deer’s shoulder, dropping the 9 point where it stood.  She had done it again, and neither of us could believe it!

We waited for a while to see if there lived a doe brave enough to try to survive the wrath of an eleven year old girl armed with an AR-15, but there were no takers.  It was approaching dark, and neither of us could stand it any more, so we went to retrieve her deer.  We couldn’t wait to put our hands on this deer.  It was unbelievable, but we’d managed to do it again.  Even if this is the last hunting season that God has given to me, it sure was a good one. 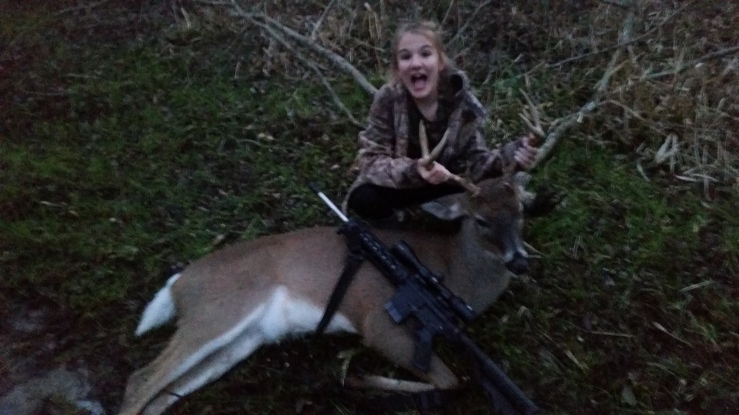 Emma Kate’s reaction in this photo is the reason that we continue to hunt for a lifetime. 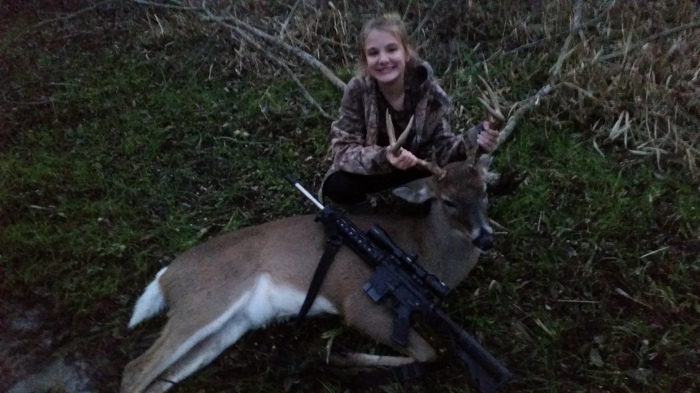 We were ecstatic, but there was much work to be done.  After we tagged it, we retrieved the borrowed side-by-side (thanks Mr. Dale), and loaded the beast for the drive back to the boat landing.  One by one, other members of our hunting party began rolling up on 4 wheelers, and side-by-sides with bows and quivers strapped to their backs.  As it turns out, both deer shot that afternoon were by women.  One by my daughter, and a doe for another young lady.  I could see the pride on Emma Kate’s face as these furry knuckled men all paid homage to beast and huntress as they garnered her with respect.  It is true that hunters all have a common bond, and mutual respect.  I’m glad that she is able to be a part of that family now, and not simply viewing it from the outside.

Because she is in every way a huntress. I just hope that she doesn’t expect to top this buck every year. If that’s the case, we’ve got our work cut out for us!

Like Loading...
‹ H.R. 367 – Trump & The Reintroduction of The Hearing Protection Act of 2017 – Making Suppressors Great Again
How to Cape a Deer for Taxidermist ›