I was heading to a favorite spot in search of river cane to cut to use as arrows for next year’s hunting season.  In order to get to my favorite patch of river cane, I have to endure an area covered in Greenbriar. As I fought my way through the pokey green strips of pain, I noticed that the Greenbriar was beginning to send up shoots, and I couldn’t pass up the opportunity to pick some on my way to the river cane patch, and back to the truck.

Greenbriar, Catbriar, Bullbriar, Sawbriar all these common names refer to one plant…Smilax.  I grew up calling it Greenbriar, so that’s how I’m going to refer to it in this post.  The easiest way to find some Greenbriar is to look somewhere between where I am, and wherever I want to be when I’m in the outdoors!  Somehow it always manages to position itself in that place.  If you spend any time in the outdoors, then you know exactly what I’m talking about.  I swear that every deer or hog I’ve shot has a natural Greenbriar compass, because they always head for the thickest Greebriar patch they can find.  Smilax is one of those plants that you just love to hate.  It is a vining plant that crawls up and around other plants forming a thick crisscross of thorned lattice work. 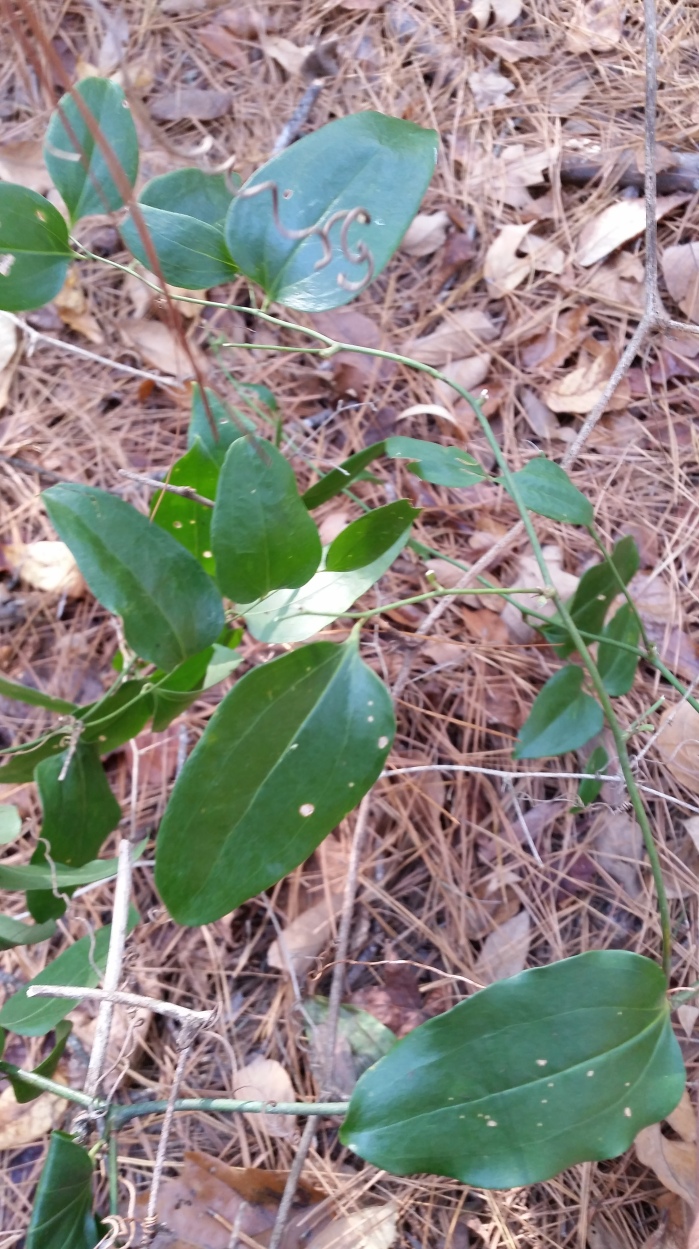 The good news is that during the spring you finally have a chance to bite back!  Green Briar begins to send up new tender shoots that will be that years explorer.  The new shoots send out tendrils and climb ever farther up into the forested canopy or creep evermore across the forest floor.  These tender new shoots have a texture very similar to asparagus.  Many people think that Smilax shoots taste like asparagus, but I think it has a taste all its own that must be tried in order to truly appreciate.

You will quickly find out where the whitetail deer are, because they love to munch on the fresh Greenbriar shoots as much as any man.  I’ve walked through large areas covered with short growth Greenbriar, but there wasn’t a shoot to be found because the deer had browsed them all away.  The good news is that this plant will vine above a deer’s reach, but well within a human’s, so there are plenty of shoots to be had.

One version or another of Smilax is available all over the United States, and elsewhere.  It is easily identified, and difficult to mistake for other plants.  If you aren’t sure, then ask a local expert before consuming any.  This is one of the identifications where you are able to identify the host plant (or a thicket of them) any time of year, and return in the Spring to harvest the good stuff.  Raw, it makes a good  snack while turkey hunting in the Spring.

Method of Collection:  The way to collect these tender little gems is not to cut them away from the vine.  If you will bend the stalk, then you should hear, feel and see a snap.  If the plant bends, then move closer to the tip until you get a crisp snap.  It is much like asparagus that way.

Here you can see the difference in color between the old growth at the bottom of the photo, and the new, lighter green shoot growing out of the old vine.

It is easy to see a color difference between the prior year’s growth, and the new lighter green spring growth. 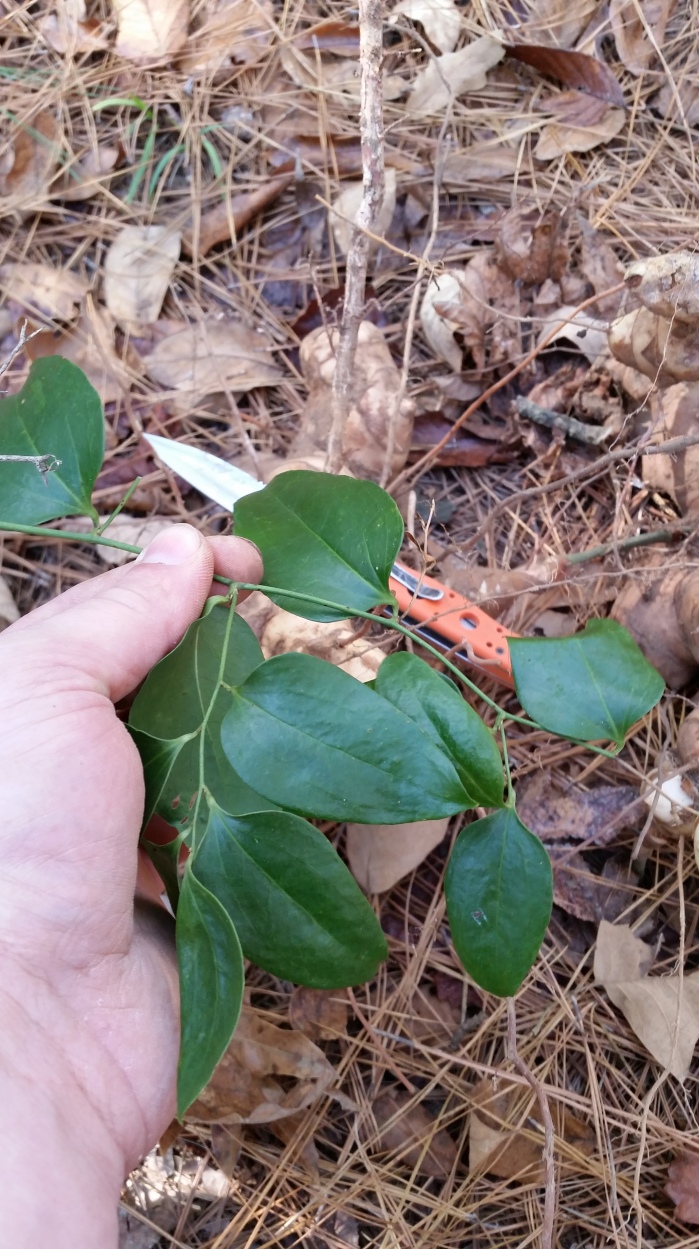 Picture of Smilax taken during the fall.

Aside from the tender shoots being edible, parts of the root are edible as well. 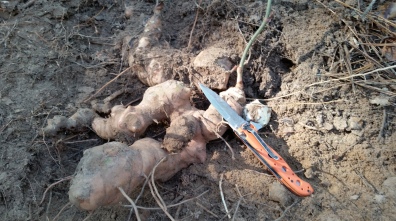 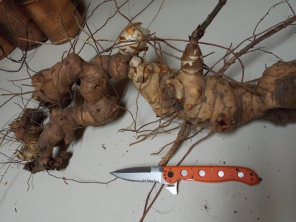 If you look carefully at the above photos, there are tender white colored “new growth” on the otherwise red-ish/brown root.  The tender white fleshed root is what you are after.  I’ve been told that the rest of the root contains a gel like material that is great for naturally thickening dishes, but I’ve never spent the time necessary to find this out.

Tender root from the Smilax plant collected in the winter time.

After a bow hunt this past Fall, I dug up a Smilax root out of curiosity.  What I found surprised me.  There was a large sweet potato looking root system that was much larger than what I had expected judging by the size of the Smilax vine.  I came to find out that only the white, new growth portion of the root was what the forager was looking for.

I boiled the root in several changes of water:

The end product came out quite edible, and had a very unique taste that was similar to a  radish or turnip in some ways, as well as tastes that are unique to Greenbriar because I lack the linguistic ability to adequately describe it.  The texture was somewhere between an apple, and a baked potato.  Although it didn’t taste bad, it wasn’t a food that I would look forward to harvesting, like the young springtime shoots, for instance.  If were lost in the woods, and hungry, then I’d have no problem whatsoever chowing down on Smilax root.  But given a choice, I’d much rather stick to the delicious shoots of spring.  I may try a few different cooking methods in the future to see if I can make a dish that plays to the Greenbriar root’s strengths. 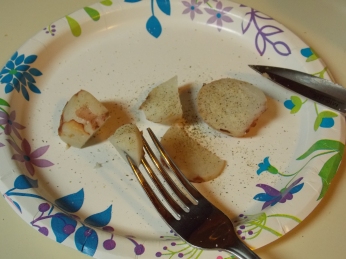 The enticing spring shoots are the way to go as far as taste is concerned.  The following recipe, I can vouch for.  It is one of my   See my post for a recipe on Sauteed Greenbriar Shoots (Smilax) for the recipe pictured below: 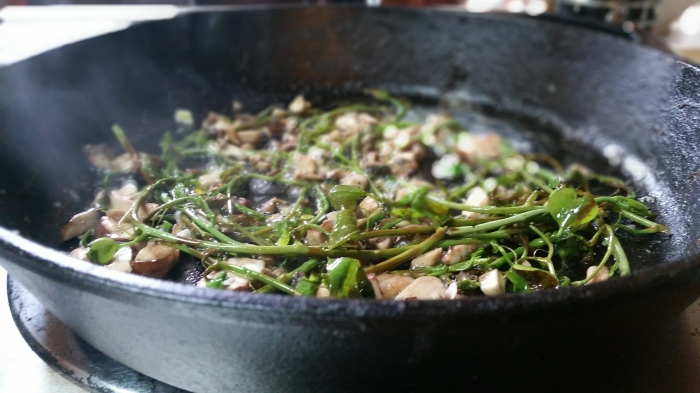