This past fall, I was walking to one of my favorite deer stands in North Louisiana with longbow in hand, and a quiver bristling with arrows.  In my mind, I planned a meal of fresh venison back at the camp that night.  Our family named the stand that I would be hunting Automatic for a reason, so I had high hopes for a successful deer hunt.  I didn’t see so much as a deer fart that afternoon, but it wasn’t a wasted hunt.

There had been an abnormal amount of rain in late summer, and early fall, and the mycelium were grateful.  Mushrooms had begun to do their thing.  This part of North Louisiana has orange dirt full of iron, and can be quite dry, and arid at times.  This particular patch of dirt is very special to me, because it has been in my family for generations.  It is also special, because aside from a few select cuts for timber, its been undisturbed for generations.  The wooded ecosystem just does what it does, and because of that it has a biodiversity that is shocking at times and quite wonderful.

I slipped along trying to minimize movement and sound in an attempt to avoid alerting any deer that may be bedded in the thicket on the other side of the oak bottom.  However, I found my eyes shifting from one side of the dusted trail to the other.  Despite the fact that my focus should have been on all things whitetail, I found myself looking for the fruiting bodies of the over excited mycelium (a.k.a. Mushrooms!)  They were popping up all along the trail as I got closer and closer to the old red oak from which clung my stand.  These woods are a mix of deciduous and coniferous trees, so you can get quite a range of mushrooms when conditions are right.  I found quite a few as I walked. Some I recognized as not edible, some I didn’t recognize (which meant not edible).  Then I saw a little gem. 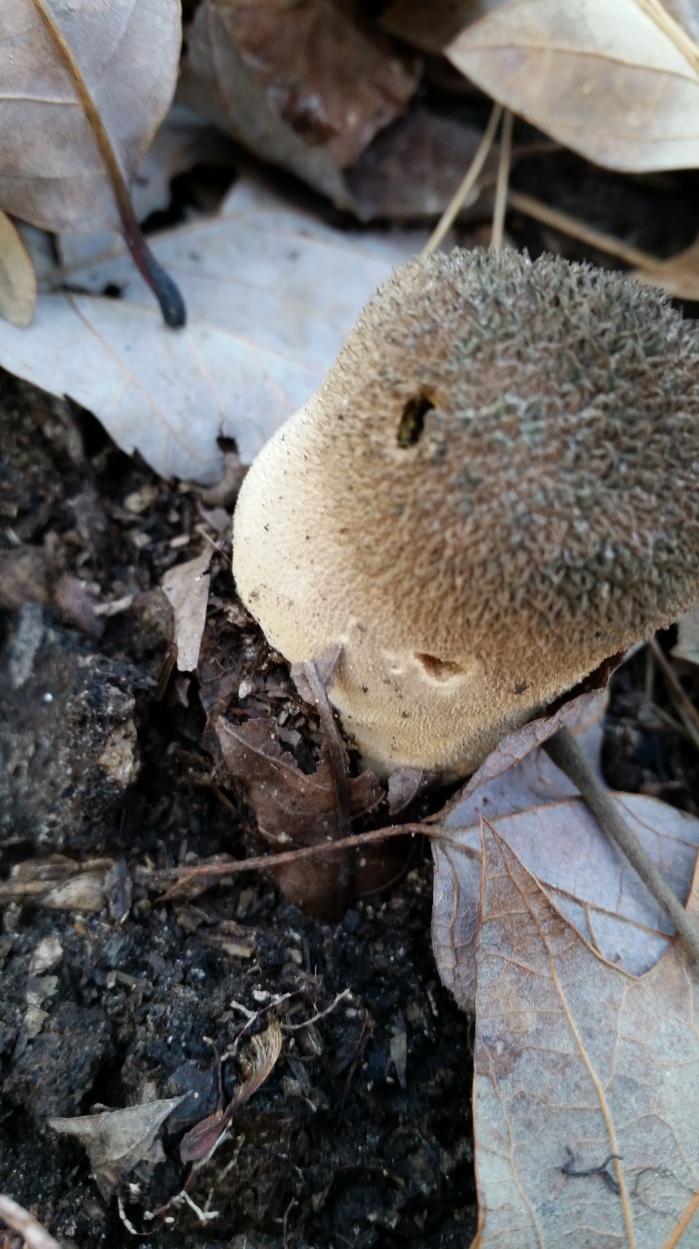 Prickly Wolf Fart (I wish I was a musician, because I now know what my band’s name would be)

This little guy is what is known as a Spiny Puffball (Lycoperdon echinatum). The most easily identifiable characteristic is, of course, the spines.  If you look closely, they stick out of the mushroom’s rounded cap, and then fuse at the tips.  When young, and prime, they are white, and turn brown or olive colored as they age (like the one pictured). Unfortunately, I was a little too late because this mushroom had already become “buggy.”  By buggy I mean that I’d already been beaten to this mushroom…by bugs!  Lots of mushroom are used as food for larvae of many types of insects.  It also had reached its maturity, so was probably a little too far along to eat anyway.  Still a cool find for me because it was the first puffball mushroom that I’d found in these woods. 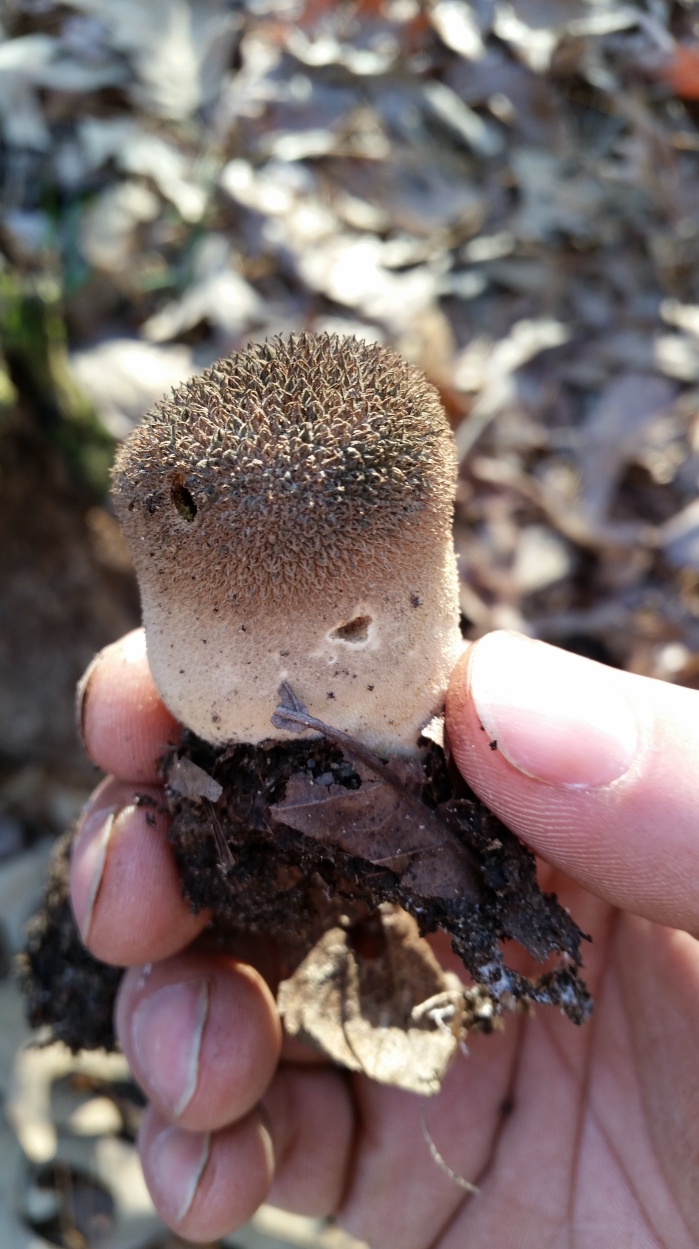 You can see that I’ve been beaten to the punch on this choice edible mushroom by bugs.

Lycoperdon is a genus of puffball mushroom that currently contains about 50 species. The giant puffballs (Calvatia gigantea) which are edible (when cooked) relatives that can get quite large (like a soccer ball sized), and are white.

One of the Best Scientific Names Out There:

The best part about this particular genus of mushroom aside from the taste when cooked, is the name.  The guy who named it & I have got to get together for a beer, because in Greek “Lyco” means “wolf” and “perdon” means “to break wind” or “fart.”

Ha Ha Ha, so this genus literally translates to Wolf Fart.  Best….Name….Ever….echinatum is Latin for “spiny” or “prickly.”  So all together it’s a Prickly Wolf Fart Mushroom.  Part of the reason for the fart references is probably because of the way that this mushroom spreads spores.

You’ve seen or stepped on them before.  The cracked looking redish brown to brown bulb that puff out a smoke like dust of spores when you step on them.  We used to love to find these as kids, and stomp on them until they stopped puffing.  These are mature puff ball mushrooms of some kind.  Apparently the dude who named this mushroom put this attribute together with his adulation for wolf flatulence.

The Lycoperdon echintatum or Spiny Puffball is characterized by the following:

Smaller puffballs can resemble a poisonous Amanita mushrooms in its smaller stage.  The Amanita starts out in an egg shaped white ball that can resemble puffballs, but if you cut the Amanita open, they will reveal the outline of a mushroom shown inside (discard immediately and do not eat if you find this).  All puffballs should be sliced open, and if there are gills, the shape of a mushroom outline, or anything other than solid contiguous white firm flesh, then you likely have a poisonous or inedible lookalike.  The L. echintatum is easier to distinguish because of its spines, but should still be split open with a sharp knife to confirm.

There are other puffballs in the Lycoperdon genus that can be confused for this like the Lycoperdon perlatum.   However, collecting the L. perlatum is not a bad mistake to make, because it too is edible when cooked and is a choice edible.

Just make certain that the inside flesh has not begun to change to a dark yellow, brown, blue, etc. It should be white, or throw it out.

Here’s where I tell you not to point loaded weapons at yourself or others, don’t run with the scissors, don’t kick a live grizzly bear in the scrotum, and don’t be a complete boob and eat random stuff that you pick up while wondering around outside.  I know if you’re reading this, then you probably don’t have to be reminded to blink to wet your eyes like some members of society do, but I still have to put a requisite warning out there for the lesser of mental stature.  If you can’t positively identify something you are about to eat (even in a restaurant) then don’t freaking eat it!  Don’t use this site alone to identify any wild edible (Use multiple sources). It can at a minimum make you very sick, and at a maximum it can kill you if you eat the wrong thing.

I’m not a mycologist.  In fact, I’m a boob who points loaded weapons at things, runs with the scissors, kicks live grizzly bears in the chimichangas, and eats random stuff that I pick up while walking around aimlessly outside.  I can not be trusted!

How’s that for a warning?