Work.    Family.    Responsibility.    Other than God, these are the very things that I’m blessed to be able to devote my life, but…  Sometimes its nice to take a break, and spend some quality time alone outside.  I find that I don’t necessarily have to have a point to an outdoor excursion.  I can just wonder around with no time schedule, no deadline, no particular place to be or time to be there.

That’s exactly what I had when I made my way out of the bustle of Lafayette, Louisiana traffic, and into a piece of private land on which I graciously am able to hunt and trap. I decided that I was going to set some snares for the hogs that are over running the place, and also use that time to scout some spots for my daughter to bow hunt hogs, and deer.

I found some good spots to set hog snares in the thick spots along the road that borders the property.  Recent rain made the swine’s trails easy to spot.  Like most animals, hogs will make a trail or a “run” that the entire sounder will follow religiously unless they find a reason to take another path.  This can absolutely be used to the advantage of the trapper, or hunter.

Hogs are great to snare because they leave no secrets about where they travel, and are used to pushing through brush.  They usually don’t notice the snare around their neck.

It doesn’t seem possible to hang a looped cable somewhere in the woods, and have a hog voluntarily stick his head inside of it, does it?  However, it happens all of the time, and it works very effectively for hogs that have become trap shy, or hunter wary as well as in areas where the laws do not allow for you to hunt at night.

You can see the trail the hogs are using, but see if you can spot my snare in there.  Tough, I know!

I like to snare the areas that are difficult to get a trap, or are hard to hunt.  I look for pinch points in a trail or several trails that make it easier to have a loop where a hogs head will be.  I look for:

If you’ve ever hunted around Louisiana, then you know that if you hunt a wooded area, we don’t have a ton of open ground.  Visibility is limited, especially during the months when the plants have their foliage.  I made my way to a spot that I’ve seen deer cross a road during the late rifle season last year.

I used to run a feeder there, but it has been inoperable for several years now (which I might have to remedy for my daughter’s bow season).  Note that the feeder is there because of the deer, not the other way around.  I always put my bait where the animal already wants to be.  I don’t try to “pull” an animal into a spot that doesn’t feel natural.

I approached the spot from the direction of the metal gate shown in the picture above, because the wind was right.  As soon as I looked down the road, which is grown up in waist high weeds this time of year, I could see the reddish color of deer backs in the dappled sunlight.

There looked to be two matriarch does with last year’s yearlings.  Just before I turned on the camera, the two does were standing on their hind legs fighting.  I caught one of the does flipping her ears back and chasing the little guys off.  Looks to be 5 or 6 deer at the crossing.  So, this was a promising scouting trip.  We may yet get a deer stand out of this.

I ducked below the weeds, and snuck a little closer so that I could get some pictures.  I took a few pictures at about 185 yards, then the batteries in my camera died.  Rookie.

You can almost hear the Cicada’s buzzing as the sun descends on this pregnant doe.

The feeder has been empty for a few years now, but I may change that before bow season.  I have roughly 5 months to build a stand, set it up, and establish a route to and from the stand that will not alert the deer herd.  I got this.

Scouting a Hog Stand at The Lair:

After slipping away from the deer, I slapped some new batteries in the camera, and moved on to scouting a hog stand for my daughter.  I knew of a spot that I’ve hunted for several years that always holds large hogs.  I’m not sure why it is, but there’s always a bruiser in there.  I’ve take to calling the spot “The Lair” due to this location’s propensity for holding some evil creature lurking in the shadows. 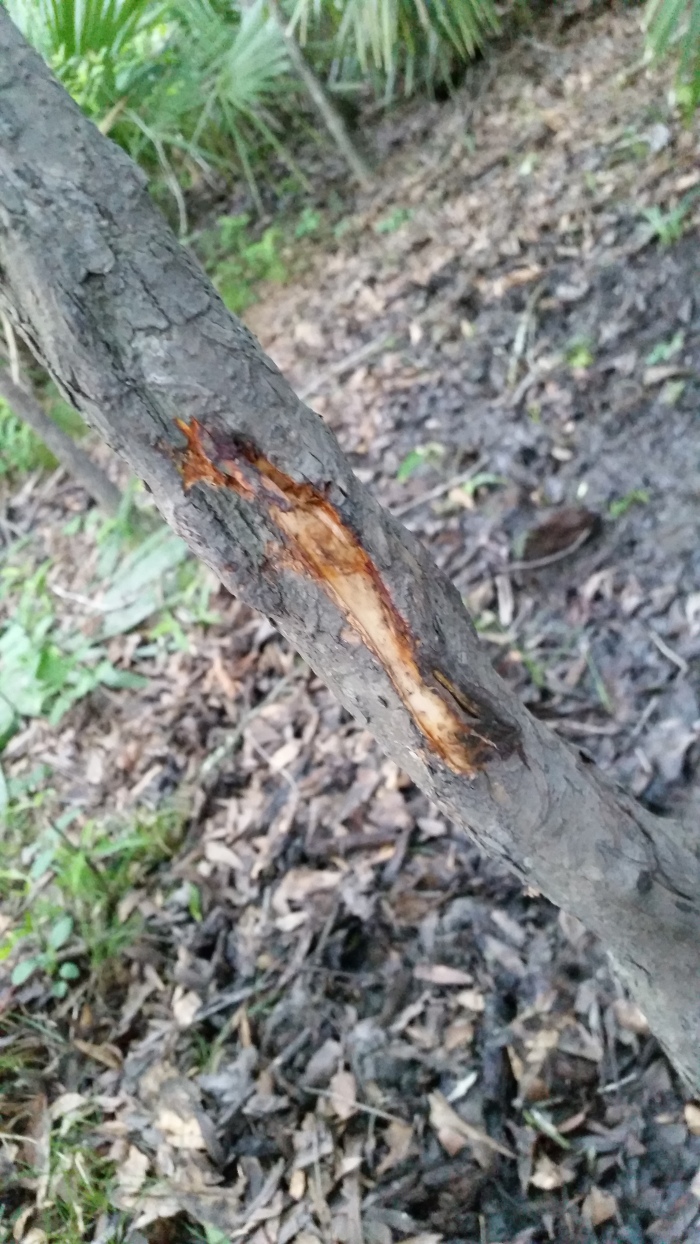 Hog cutting on a sapling on my way to The Lair

On this day, The Lair did not disappoint. The hog sign was so fresh that my head was on a swivel as I fumbled between the thick palmetto fronds.

Fresh tracks led to a wallow that was very recently vacated by it’s creator.  I must have jumped him out of this hole on my way in.

I finally came to an opening containing a wallow that was so fresh the mosquitoes were giving me an accusatory look as if I’d just blown their meal for the day. My Truffle Shuffle through the palmetto must have sounded the alarm, and this big boy quietly made his way into the swamp to the South.

This big boy left behind a Snout Mold, so I could see how big his head is.  Not a little dude.

I decided to take the long way around so that the big hog wouldn’t be as likely to pick up my scent.  I slipped through the palmetto like a chubby ninja until I came upon a section that had a “clearing” which meant that the hogs had laid down the palmetto in an area roughly 10 feet in a circle.  I hadn’t reached the clearing yet, but could see into it.

In my usual fashion, I made some kind of racket, and sent a flurry of little swine shaped footballs scurrying in all directions through the thick palmettos.  Instant chaos!  It was like the little shoats counted to 3, then exploded like a covey of quail in every conceivable direction but up a tree.  Aside from a quick flash of dark fur darting through the matted undergrowth, the only thing that gave away the location of the little buggers was the movement of the palmetto tops as they passed.

I followed one series of shaking palmetto tops until a little piggie popped out into the “clearing” traveling at roughly Mach 2!  I took a shot, and was lucky enough to connect, dropping the little rooter sow in her tracks.  A solid black pig zig-zagged through the opening.  I sent another copper 6.8 SPC pill his way, but he zigged when he should have zigged, because the bullet never touched him.  Slippery little suckers!

All in all it was a great day.  The weather was crisp, and cool (in May!).  I set some hog snares in good locations.  I found a decent deer stand for Emma Kate.  I found a good hog stand (although the occupant may be too much hog for Emma Kate’s current bow set up), and I managed to come home with some fresh pork that is just the right eating size.

It was a good day.