I was in the middle of a flurried conversation on my cell phone in the parking lot of my office.  As words bubbled out of my lips like a Daffy Duck sneeze I paced back and forth speaking while feverishly gesturing every word with my hands as is the custom in South Louisiana.  As I did so, my eyes inevitably wandered around on the ground, and in the trees for anything familiar that I could eat.  The more I’ve taken to foraging, the more that I have a wandering eye for such things.  It’s almost a game I play with myself to see how many edible species I can identify in any given place.  My eyes fell beneath the copse of live oak trees, the shade from which I was gratefully using to keep the sun from making the stifling heat even worse.

There I saw it.  An Old Man of the Woods mushroom.  As I bumbled through my the conversation like a grizzly bear in high heals, I walked around with my eyes affixed downward, and one by one, the familiar cracked black and white domes began to appear.  Like little Cruella de Vil hats popping out of the live oak litter, and green summer grass.

The Old Man of the Woods (sometimes called Strobilomyces floccopus & sometimes called Strobilomyces strobilaceus); however, I will just call it Old Man of the Woods. It’s a member of the Bolete classification so it will have the signature pores on the underside as do all Boletes.  Also with all Boletes you will want to clip a portion, or pinch a part to the underside of the cap to see if it bruises blue.  Nearly any Bolete that bruises blue is considered poisonous, and should be avoided (I know…I know, there are exceptions, but if you avoid the blue bruising ones, you will also avoid all of the poisonous ones until you get your degree in Mycology.) 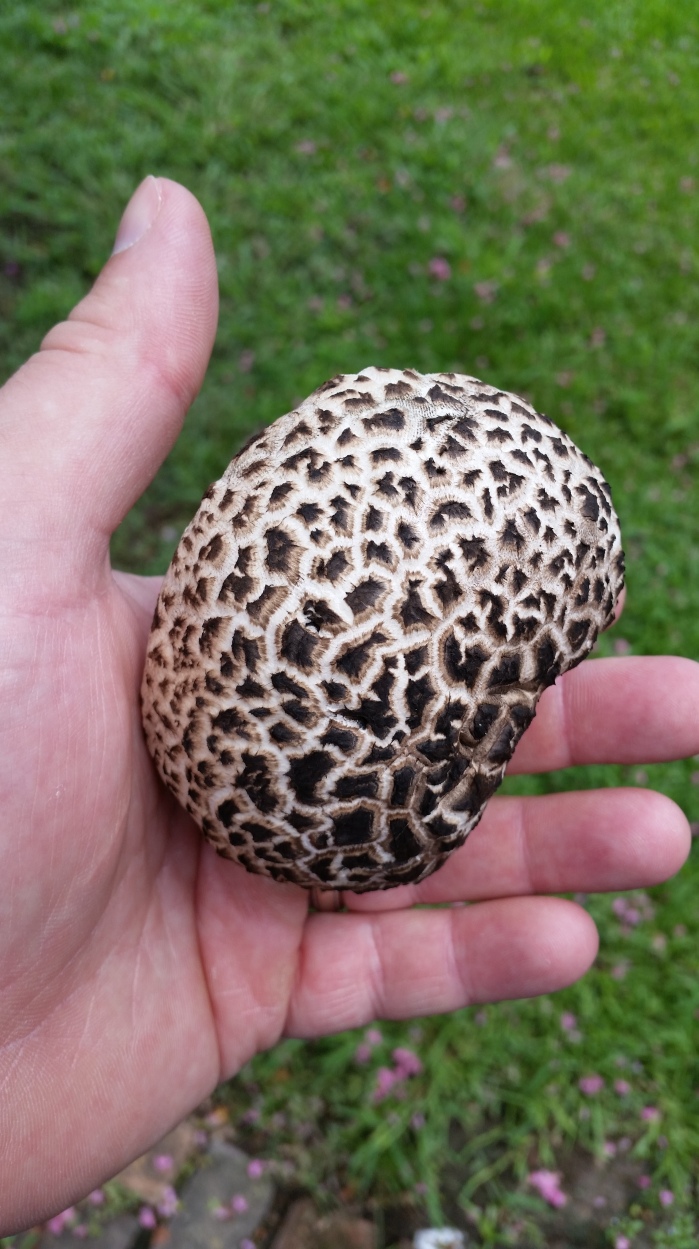 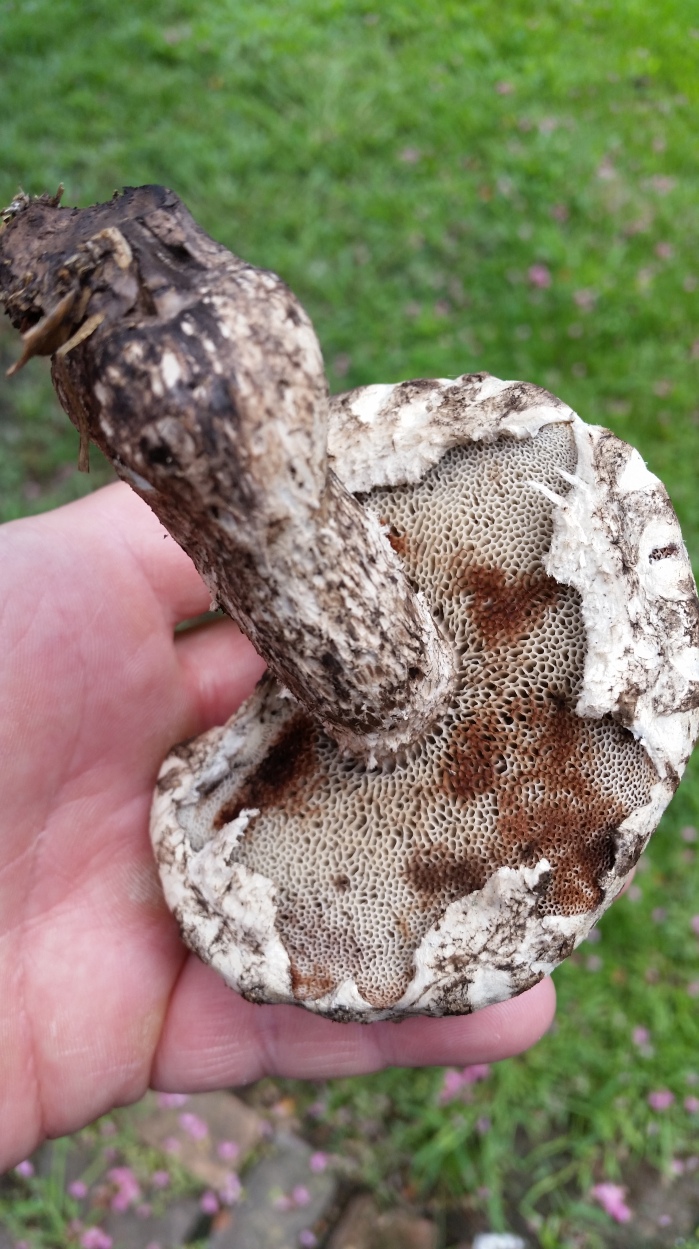 Turns red after exposing to air. 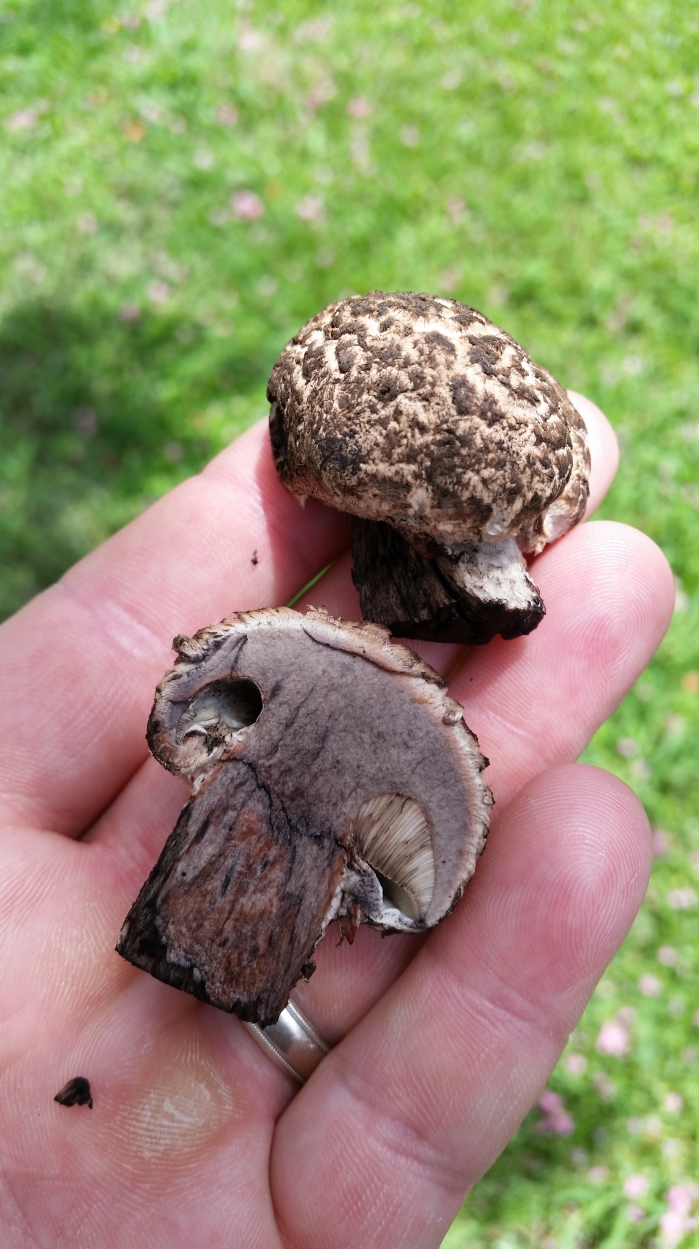 With time, the mushrooms internal flesh will turn from a rusty red to nearly black. 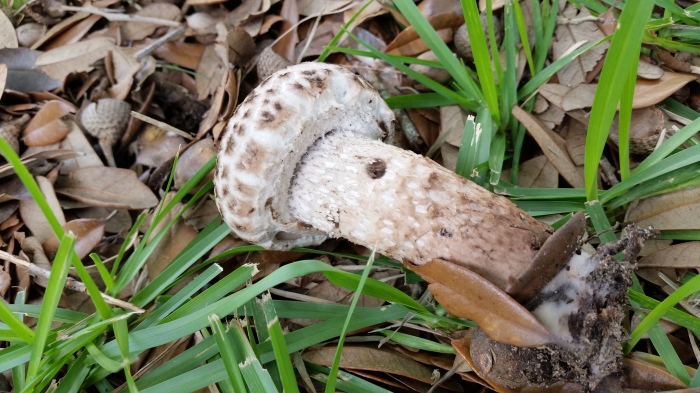 The veil that covers the pore surface on the underside of the cap is still attached on this Man of the Woods mushroom.

Old Man of the Woods taste and smell much like a store bought mushroom, and can be used interchangeably in recipes.  I like to cook them with red meat of some kind.  Just make sure to pick the young firm ones to cook with.  The older ones don’t have as good of a flavor or texture.  They also have a tendency to darken whatever you are cooking, so keep that in mind.

Man of the Woods Mushroom

Warning:  Don’t eat things you can’t identify.  Falsely identifying a mushroom can be deadly, or at least make you wish you were dead.  Don’t be an idiot.  Use multiple guides, and reliable sources to identify what you are about to eat. Don’t drink the water in Mexico, and never feed a mogwai after midnight.