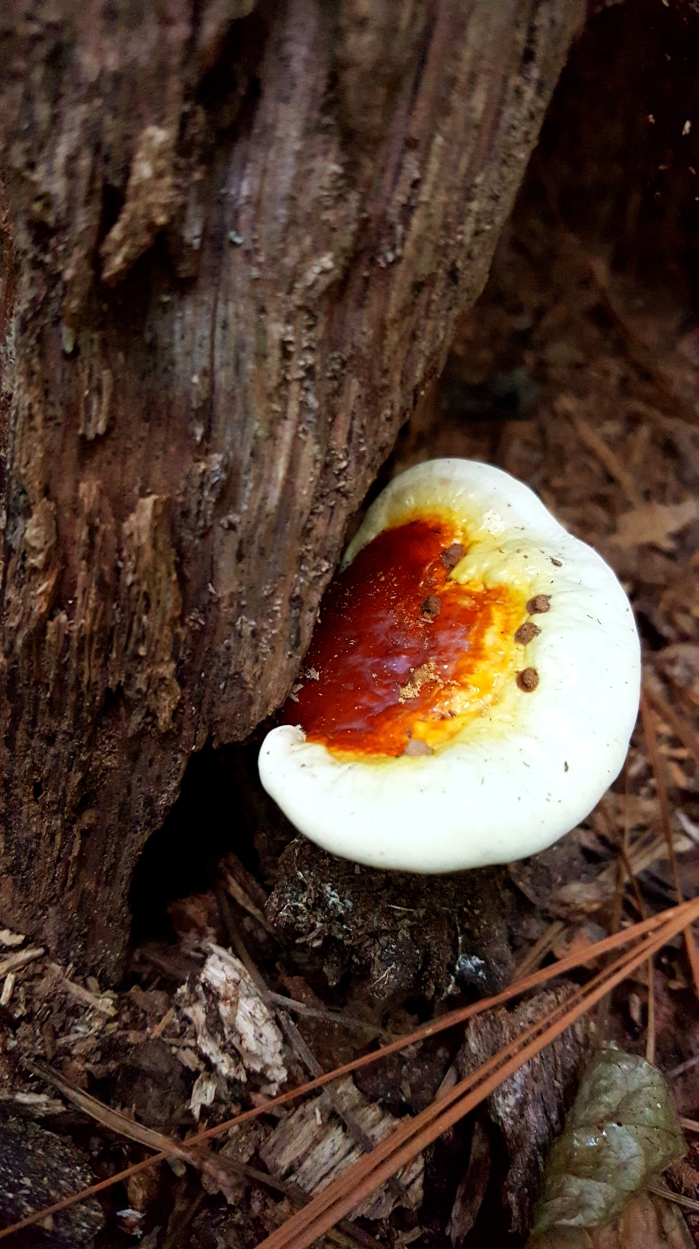 I was carrying a heavy metal deer stand through the tangle of the North Louisiana woods.  Despite the early morning hour, sweat dripped off of the tip of my nose as I fumbled through the morass of undergrowth headed toward an oak bottom where my 12 year old daughter’s bow stand would eventually be placed.

The rain that fell in the predawn hours had subsided leaving the woods with a clean smell and appearance.    Regardless of the morning’s beauty, the humidity was high enough to humble any man or beast.  After schlepping deer stands all over the woods for the two previous days, I was so tired that I had 3 sore butt cheeks.  I happened to stop for just a moment to catch my breath, and remember my age.  Wishing that I’d invested more time in the gym, and less time exploring my weakness for South Louisiana food and craft beer, I happened to glance at the decomposing stump of a long deceased red oak tree. 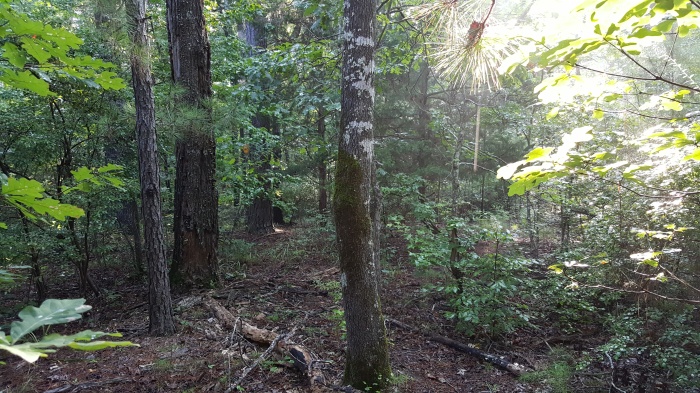 Other than searing and stifling humidity, it was a beautiful morning to be in the woods.

The image of what was growing out of the base of that dead standing tree rolled around in that empty skull of mine until it triggered the sensation of recognition.  Here was one of the mushrooms that I’ve wanted to find for some time now.  The mighty Reishi mushroom has been on my “mushroom hit list” ever since I began my journey into the forbidden world of wild mushrooming.

Aside from being incredibly rare in nature (estimates are such that only one or two trees in 10,000 will grow the magnificent Reishi and only then under the right conditions), but this is also perhaps one of the oldest and best known medicinal mushrooms of all time. 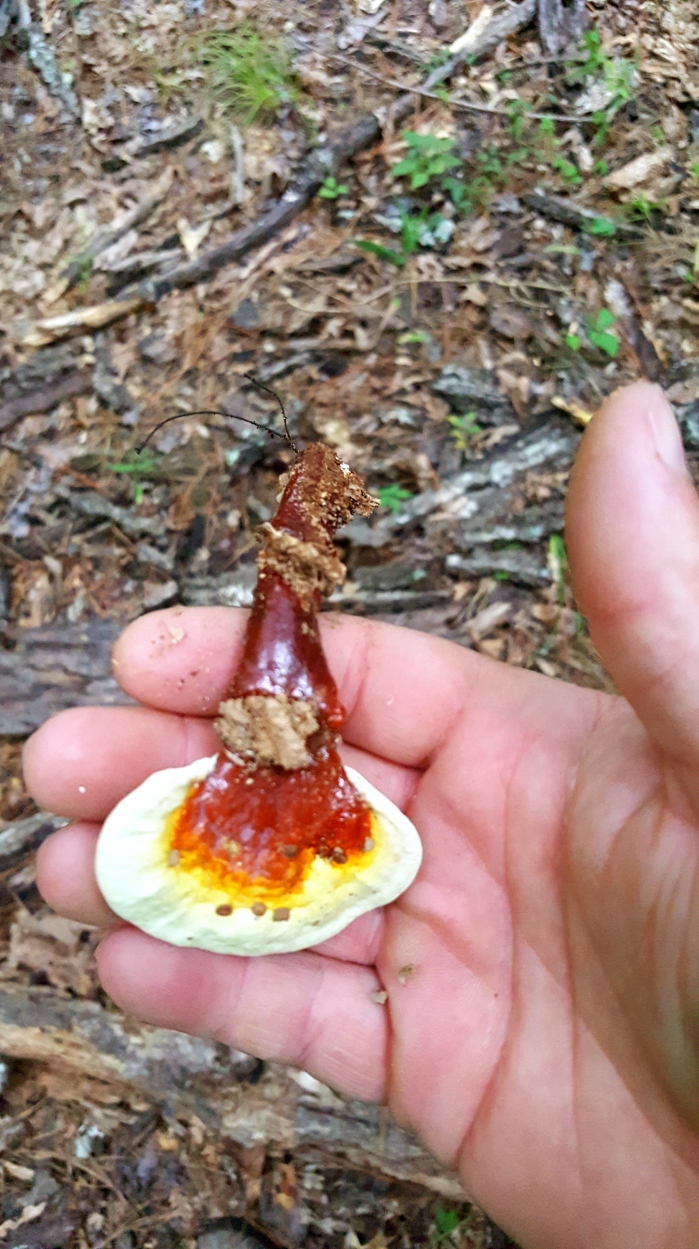 You can see the well known varnish like sheen present on this mushroom’s cap and stem.

Note the white pore surface on the underside of the cap of this Reishi.  Also note the black thread-like “roots” the presence of which the author was previously unaware.

This particular mushroom was found next to an old, and no longer usable mushroom on the same stump.  It was quite beautiful, and I used it to attempt to inoculate a few stumps in the area.

This over the hill Reishi Mushroom was found on the same stump as the usable one pictured above.

So, what makes Reishi so special?

When you have a medicinal mushroom that has been known in China (they call it Lingzhi) for roughly 2500 years as “the mushroom of immortality,” you know that there must be something there.  That’s one hell of a claim, and 2500 years is a lot of time to have been disproven.  Thus, making the Reishi mushroom one of or perhaps the oldest medicinal mushroom still in use today.  The popularity of this mushroom for it’s medicinal use is well known throughout China, Japan, Korea, the United States, and elsewhere. The Vietnamese call this mushroom Linh Chi, which translates to “Soul or Spirit Mushroom.”

As written in Baopuzi, by Ge Hong, during the Jin Dynasty in China it is said that “those [Lingzhi mushrooms] of intermediate class confer several thousands of years, and those of the lowest type a thousand years of life.”  The name Reishi is Japanese, but it is also known in Japan as Mannentake which translates to “10,000 year mushroom.”  Now, if these ancient descriptions are only half right, I’d settle for a measly 5,000 years.

As mentioned above they are relatively rare to find in nature.  Due to this rarity, the Ling Zhi mushroom was mostly reserved for the consumption of royalty or the wealthy in ancient China.  Today, these wonderful mushrooms are cultivated, so are widely available to the commoner (who may not be as comfortable consuming them from the wild). You can get this mushroom in a variety of media such pill form, tea, dried, sliced, whole mushroom, etc.

What are the medicinal uses for Reishi mushroom?

It is claimed by many that Reishi mushrooms offer both protection against, and/or treatment of a variety of conditions or illnesses, including:

I can not attest to the validity of the claims made about the medicinal use of this mushroom.  There are a number of medical studies that have been conducted across several countries that seem to suggest that there may be merit to some of these claims.  Even if a portion of the claims are true, you can see why a multitude of cultures across thousands of years consider Reishi mushrooms a fungal pharmacy.

For all of its wonders, one of the downfalls of Western Medicine is that it focuses on treating the problem after it already has effected the patient.  Medicine of the East focuses on prevention as much as healing.  Periodic consumption of Reishi tea, or Reishi extract to aid in the prevention of many of the maladies listed above is where Reishi’s claim to fame lies.  If you are considering consumption of these mushrooms for a particular issue, you must consult with your physician.  I would also recommend having the medical studies conducted to show your physician when you approach him/her.

What in the Sam Hill is an Adaptogen?

Merriam-Webster defines and Adaptogen as “a nontoxic substance and especially a plant extract that is held to increase the body’s ability to resist the damaging effects of stress and promote or restore normal physiological function.”

In other words, it has the ability to put the body back in a normal homeostasis.  I can always use something to reduce the negative effects of stress on the body.  Needless to say, this is a very special part of nature, and if nothing else it’s a really cool find.

(1) As with all of my posts, do your research before you eat anything you collected from the wild.

(2) Use multiple, reputable sources to identify any wild food prior to consumption.

(3) Consult a qualified physician prior to consuming wild medicinal plants.  None of the material contained on this blog is intended to diagnose or treat any ailment. Many of the claims made by people regarding treatment of the body by use of the things mentioned in this blog are not confirmed by the FDA.

(4) If a woman is upset, then hold her close to comfort her, and if she starts to growl, slowly retreat a safe distance, and throw chocolate at her.

(5) Hold your girlfriend/wife’s hand in the mall.  It looks romantic, but it’s economic.  If you let go, she’ll start shopping.

(6) For certain people “Be yourself” is the worst advise you can give them.  Tell them to be someone else.

In case you were wondering, yes I did leave behind some young growth to help propagate new growth in the area (which I will check next year).

A smaller mushroom just emerging.  I left a few of these behind to spread spores.