The “toothed” leaves of the Common Sow Thistle (Sonchus).  This example is a young plant that has not yet sent up a flower stalk.  Perfect for the plate.

Sow Thistle is one of my favorite greens when collected from a young plant growing in partial shade.  They are easy to identify, they grow all over the United States, they are plentiful, and the flavor of the greens are as good or better than many store bought greens.

One of the most easily recognizable characteristic on the Sow Thistle is the way that the leaves wrap around the stalk or stem.

Here is an example of how some of the leaves will wrap around the stem of the Sow Thistle plant. 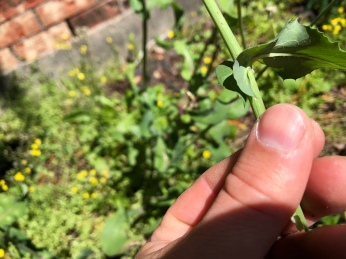 Interesting History: In case you are wondering, yes these are growing in my flower bed at home, and no, I didn’t grow them there on purpose.  They are found any time after the ground is not frozen in nearly all parts of the United States.  They will grow in many types of soil, and are originally from Eurasia, but it is said that they made their way into the United States on ships from explorers who brought them along as food.  In fact, in New Zealand it is called “Puha“, and is eaten like a vegetable among the native Maori people.  It is believed that the Maori brought the plant from various Polynesian islands when the first canoe riding Maori settled New Zealand some time between 1250 & 1300. 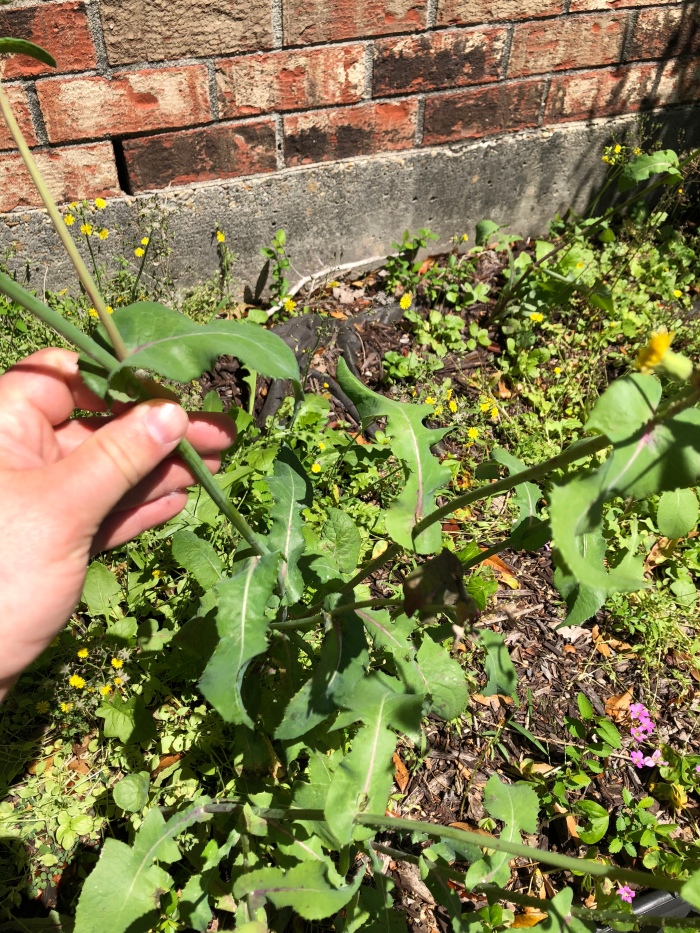 The Greeks valued it as an herbal food source as well.  In fact it’s scientific name is Greek, Sonchus oleraceus.  Sonchus meaning “hollow” due to the hollow stem, and oleraceus translates to “edible or cultivated” in Greek.  So it literally means “edible hollow stem,” which is funny because I’ve never actually eaten the stem (which you can).   The Greeks attributed this plant to vitality, and strength, similarly to the treatment of Dandelion (Taraxacum) by ancient cultures.   In fact, Pliny the Elder, wrote that Hecale regaled Theseus with a dish of Sow Thistle before his encounter with the Bull of Marathon.  Pliny the Elder…what a gossip, huh?

You will also notice in the picture of the broken stem another identifiable characteristic, which is the milky latex that is present in the leaves and stems when you break them.  This one doesn’t have as much as normal, probably because we got a real frog strangler of a rain for several days prior to this particular plant being broken open.  In general there are only two other edible plants that I know of that you would want to eat that emits a white (latex) substance.  One are Figs (which we all could readily recognize), and the other is Wild Lettuce (Lactuca canadensis) – Wild Edible Plants. 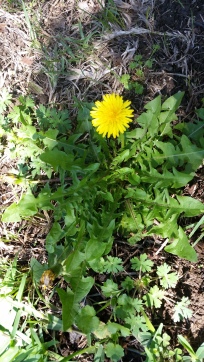 The leaves on this plant are “toothed” similarly to another popular wild edible plant, Dandelion (Taraxacum) – Wild Edible Plants, but the Sow Thistle has small pokey things on the outside of the leaves.  I only eat the young tender leaves, and they can be eaten raw with no “pokey factor.”  However, some of the older leaves can be sauteed or boiled in order to soften the spines enough to eat.  I don’t usually bother with the leaves when they get this far along, but you can cut off the spines and still eat the leaves when the spines get to be too tough to soften when cooking.  The older leaves also can get a bitterness that can be removed by boiling them in a similar way that you would prepare collard or mustard greens. 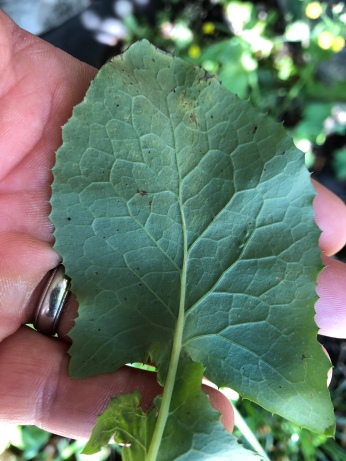 The picture above is still tender enough to eat raw, but I usually saute them or throw them in with pasta, or something.  Cook them like you would spinach, and you really wouldn’t notice much of a difference.

The color of the leaves will also vary from green when young to a light purple or pink color.  Usually, if growing in full sun, or in an older plant the leaves will be more of a purplish color. 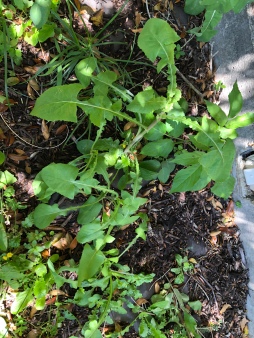 A Couple of Young Sow Thistle Plants Before Flowering.

Earlier in the plant’s life it will make a kind of basal rosette, which is prior to flowering or putting out seeds, which makes it difficult at first to distinguish between the Dandelion, Wild Lettuce, and Sow Thistle.  However, once the plant sends up a stalk and begins to flower and put off seed, it makes for a quick and easy identification.  Once you get better at spotting the difference, you will have no problem picking out the young rosettes when they are in the best condition for eating.

The flowers are yellow with lots of tiny bright yellow peddles that are similar to a dandelion, but usually the flower is smaller.  Once the seeds begin to form, it is transmitted by wind or water in one of those puffy looking seed

Here you can see the closed buds, the yellow flower, and the fuzzy seeds all on one plant.

things.  The puffy seed pods are are called a pappus in case you were wondering, and they look like something that gives those who have allergies fits.

Not In the Thistle Family:  Interestingly, the Sow Thistle is not even in the Thistle family, and is more closely related to Dandelion and Sunflower than an actual Thistle.  If you see a “real” thistle, you will immediately notice the difference in the spines on the plants.  Check out Bull Thistle (Cirsium horridulum) – Wild Edibles Plants if you want to read about an edible “true” thistle (Cirsium). 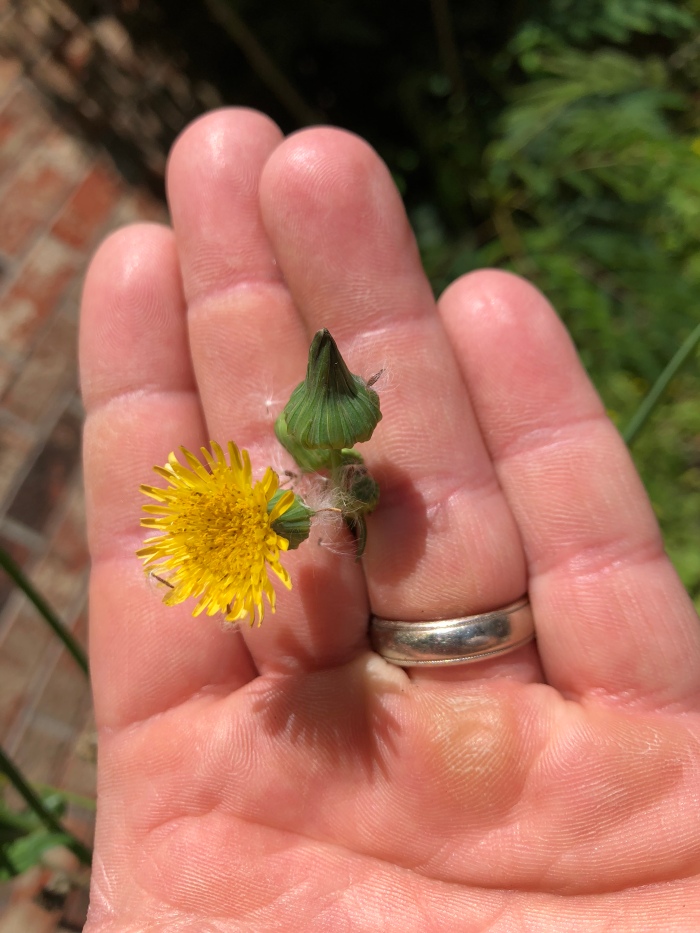 Closer look at the flower, flower bud, and puffy seed (pappus) of the Sow Thistle (Sonchus)

Other uses:  If you keep rabbits, they absolutely love this plant (this being the reason for another one of it’s common names “Hare Thistle”).  In addition, pigs love it as well.  The plant was commonly fed to lactating sow hogs because it was believed to aid in milk production (probably because of the milky sap produced).  This is the reason for the common name “Sow” Thistle.

WARNING:  If you are ignorant enough to believe whatever you read on the internet, then you should not be attempting to identify wild edible plants.  I’m not a botanist, and I don’t play one on T.V.  I’m just a chubby redneck who chews on random plants that I find in random places.  Don’t use any of the information found on this site for identification purposes.  Use multiple reputable sources before you eat anything you didn’t purchase in a grocery store.  Once you have correctly identified something you intend to eat, seek the advise of a local reputable expert.  After all of that, rub it on your skin to insure that you do not have a reaction.  If you decide to eat anything from “the wild” then only do so in small quantities until you know how your body will react.

Like Loading...
‹ How to Get Started in Shooting Competitions/ the Shooting Sports – USPSA / IDPA / 3 Gun
Making USPSA Target Stand ›