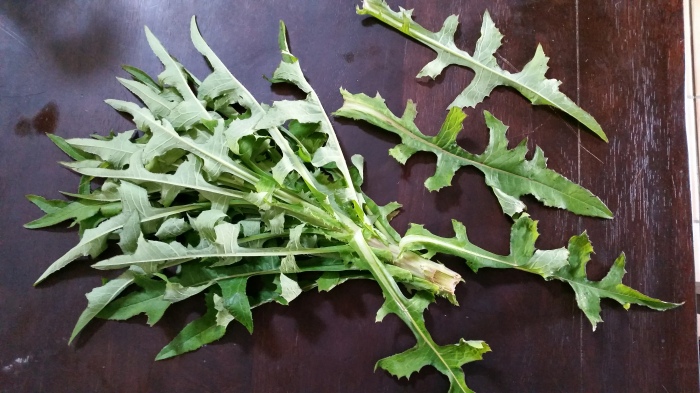 Wild Lettuce is not what you think! This ain’t your grandmammy’s salad lettuce. Wild Lettuce is also known as Yellow Lettuce, or Lettuce Opium! The latter is a reference to this plant’s ability to produce a milky substance from a broken stem, leaf or root which has many of the same effects on the body as a weak dose of opium. This particular variety produces a white sap that quickly turns to a tan or light brown color as shown in the photos below.  In other varieties of this plant, the sap remains white after exposure to the air. The sap from Wild Lettuce contains lactucarium, and has been known by pharmacology and the herbalist community for many moons for its pain killing, and sedative properties common to opium.  The milk-like substance is actually a form of latex, and it’s what gives the plant part of it’s scientific name.  The Lac in Lactuca is a derivative of the word for “milk,” and canadensis means Canada, which is where it was probably first identified by the nerd who named it.

See the Tan Colored Sap from the Lactuca canadensis 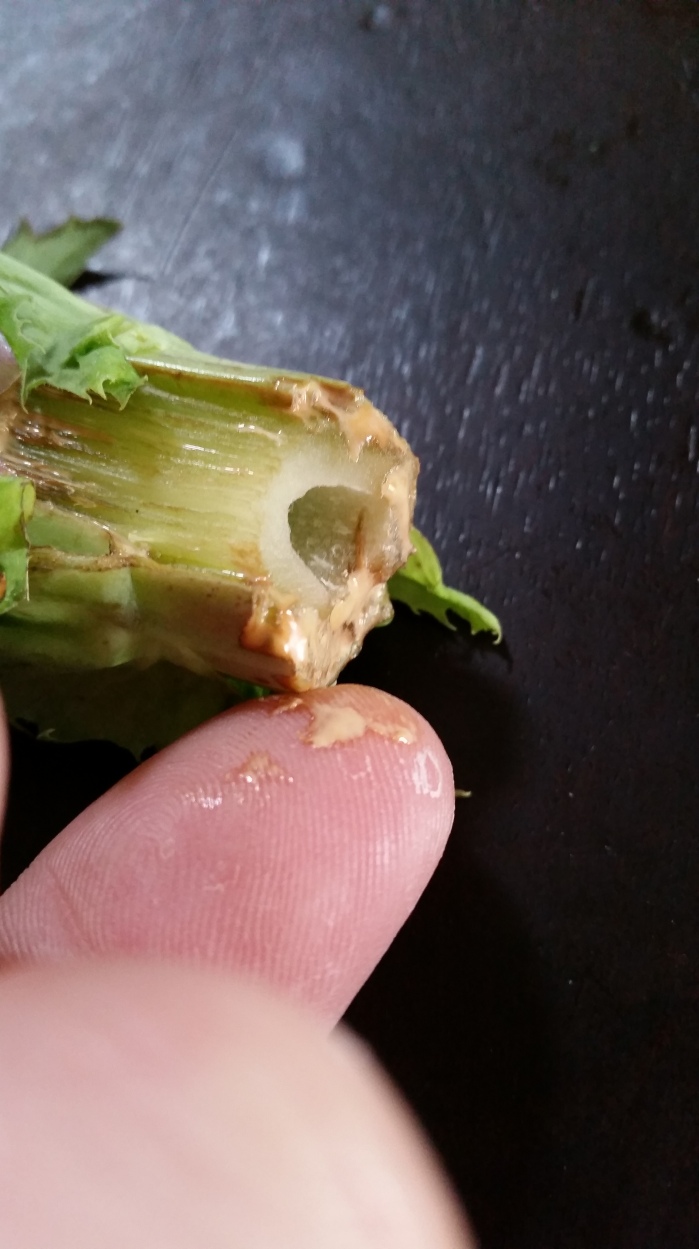 Despite what some people have purported on the interwebs, it does not contain opium.  I’ve never partaken, but it is reported that the effects are mild, and do not have many of the negative side effects of the poppy milk (opium) relative.  I find it ironic that I found the plants pictured in this article in the overgrown flower beds of a pharmacy.  Picking Opium Lettuce in a pharmacy parking lot…Guess Mama didn’t raise me right!

Wild Lettuce looks like a cross between Bull Thistle, and Dandelion, with it’s thistle like stalk, and its dandelion looking leaves.  This is one of the few plants that contain white sap that are considered edible including Sow Thistle (Sonchus), Figs, and Wild Lettuce. Keep that in mind when checking out a plant…if it contains white sap, and isn’t one of the plants I just mentioned, then you’ve probably misidentified it.  FYI, white berries are also considered a foraging No No, so always avoid that as well.  Another identifying characteristic of Wild Lettuce is that it contains spikes or spines on the bottom of the leaf’s center vein.  The spines on the L. canadensis is more subtle than other Wild Lettuces like the L. virosa, but the spikes can still be felt with the hand, and if you look closely you can see them on the leaves. 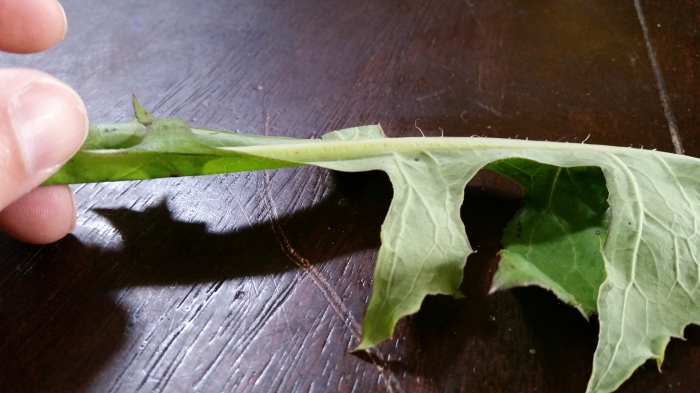 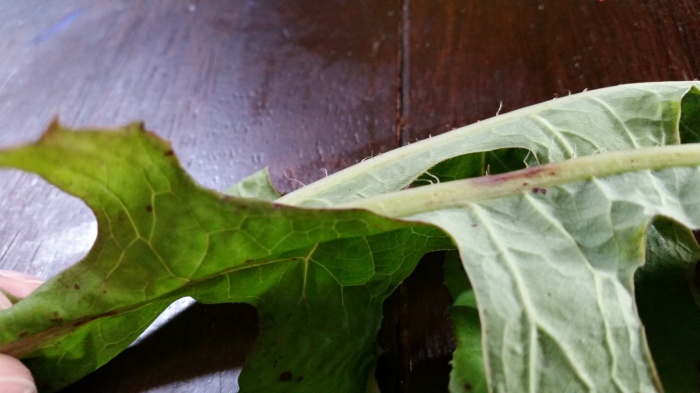 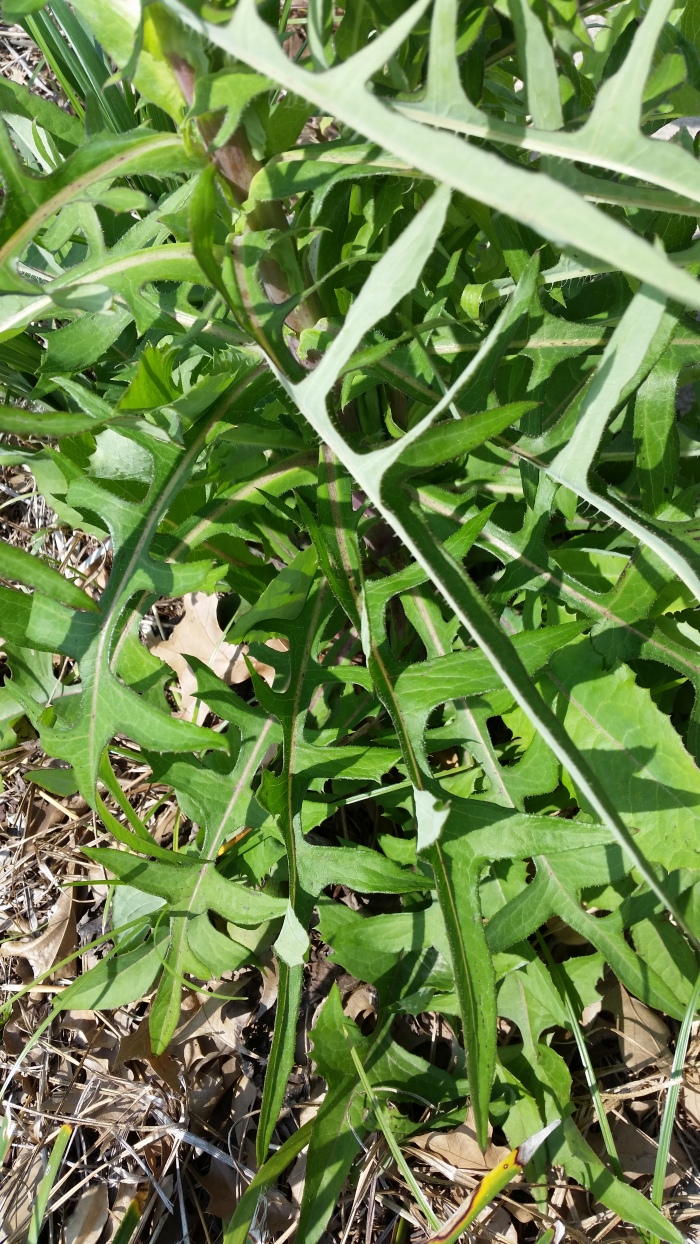 How to eat them:  The younger, and more tender leaves can be boiled to remove the bitter flavor from the milky lactucarium, and eaten.  As with any wild plant, after laboriously identifying this plant from multiple sources, I would only consume a very small amount, and wait 24 hours to verify no ill effects on the body.  In addition, I wouldn’t consume large amounts of this plant.  Rather, I would mix this herb in with a variety of other known species plants.

The first year plants will be a basal rosette.  The second year plants will put up a stalk, and flowers.  The seed produced is a fluffy looking thing (pappus) that you see floating around that reminds you that Spring is allergy season. 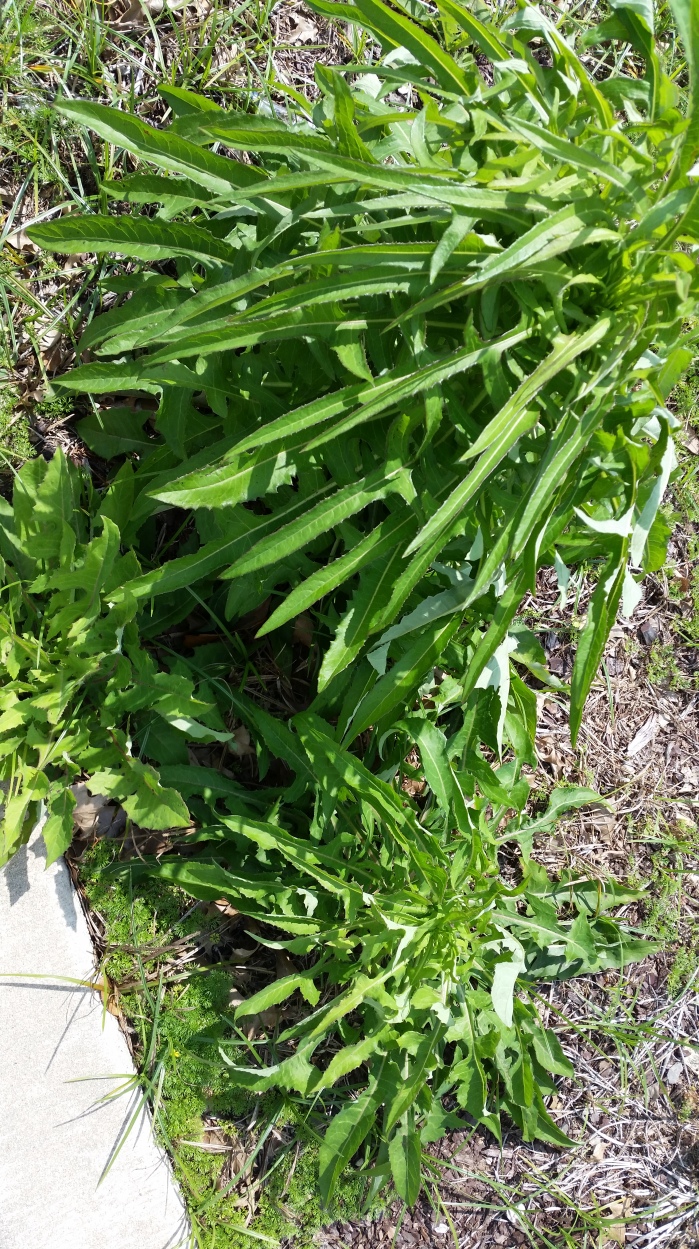 This photo shows two first year plants in the foreground, and a second year plant sporting a stalk furthest from the camera.