Dandelion may be the most well recognized, and most talked about wild edible.  Dandelion is where most prospective foragers get their start. The entire plant including the leaves, stems, flowers, and roots are edible.  Here in South Louisiana it’s beginning to feel like Spring, and that means fresh, tender dandelion greens!  You can find them in warmer climates throughout the fall.

Dandelion gets its name from a mispronunciation of the French Dent-de-lion, being translated as “tooth of the lion”, or “lion’s tooth”.  This is probably an homage to the lion-like yellow mane of the flower it produces, coupled with the tooth-ish shaped leaves that the Dandelion puts out.  I have no freaking idea what a lion’s tooth looks like, nor do I know how a Frenchman would have either, but there you have it.  Not a lot of lions running around France, but whatever man.

Single Loin-like yellow flower (a/k/a a floret) of the Dandelion.  Note that they will be on a single, hollow stalk (not multiples on a single stalk)

See the tooth-like shape that gives dandelion its common name.

Dandelions come from the Taraxacum genus which is wildly distributed across the United States, and most of the Northern Hemisphere, so they are a good edible to learn.  The pictured beauty is from Taraxacum officinale. When you see the term “officianale, or officianalis” it comes from the Latin literally meaning “from the officina” which is the office in which monks stored medicines, and herbs in a monetary.  These were the first pharmacies.  So, this particular plant has been used as a pot herb, or as medicine since it was given its modern scientific name.

Even though they are among the most easy to find, and nutritious edibles, they are considered a weed by some.  Many of you have spent some time, money, and much effort to eliminate them from your lawn.  One of the things that makes them difficult to eradicate, as well as one of the reasons that they are easy to find is that most of this genus is asexual, meaning they do not need a male and female plant to reproduce.  You could say the Taraxacum genus is a very liberal/progressive group of plants as they are very “gender neutral,” and don’t concern themselves with gender identity.

Anyway, they put up a seed head on a single hollow stalk emanating from the middle of the leafed rosette. You’ve seen these puff-ball looking seed head before.  Once you’ve seen them, they are unmistakable.  As children, we used to make wishes, and blow them.  If you blew all of the seeds off of the puff-ball, you’re wish would come true.  They never did, so I’ve been eating their offspring for decades as retribution.  Muhahahaha!

Puff-Ball like seed head.  The wind (or bad breath) distributes the seeds.

As far back as records have been kept this plant has been consumed by human beings either as food, or as a medicinal herb.  There are records of its use in nearly every ancient society. I find it funny that it is viewed in North America as a weed, and we are constantly trying to eradicate it. It is even believed that they arrived in North America on the Mayflower.  Probably not as food, but as a medicinal herb used to ward off certain ailments, due to its high vitamin content.

It has likewise been used as a medicinal herb since the times of prehistory.  The greens are good sources of fiber, and vitamin K, C, A, calcium, iron, potassium, and manganese. Dandelion has been used to:

I could go on, and on, and on.  Just suffice it to say that dandelion is a healthy wild green that is easy to identify, and collect.

For preparation, they can be eaten raw in salads, or on a sandwich, etc.  However, I find them slightly bitter this way.  I prefer to either blanch them in boiling water, or saute them slightly before adding to a dish. As with any plant, you want to select the young, and tender greens.  The older greens can get tough, and slightly more bitter (still edible, but who wants to go through that trouble, and have it taste like crap?).  If you can pick the greens before they make a flower stalk, or seed head, they will be less bitter.  Another good quality is that you can remove most of the leaves, and as long as you don’t dig up the root, it will continue to make new greens.  You can generally use dandelion greens in any dish you would use spinach. There is sometimes a white milky substance produced when you remove the leaves from the plant.  This is actually a type of latex. 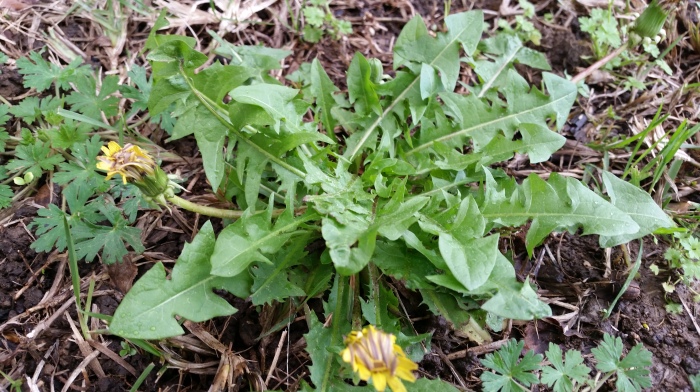 The flowers can be eaten, or used in tea, which imparts flavor & nutrients, as well as giving the tea a yellow color.  The roots can be dried and used in tea.  Dandelion tea is well known for its use in cleansing the body, and as a diuretic.  The root can also be dried, roasted, ground, and used as a coffee substitute.  One of its cousins, Chicory, is more widely known for its use in coffee.  This is one of those plants that has a great deal of data out there because of its wide distribution, and the duration of time it has been consumed by human beings.  Again, I could go on & on, but I won’t.

I have a confession to make.  Even though I know in the back of my mind that dandelions are good for me, and do all of these wonderful things, I really just eat them because they taste good!

Below is a quick and easy way to prepare these delicious greens.  If you aren’t a bacon fan, (then I feel sorry for your pitiful soul), you can use olive oil, salt and pepper.  If using bacon, I don’t add anything other than maybe a little black pepper, because it’s already pretty salty.

Pick, and wash the greens 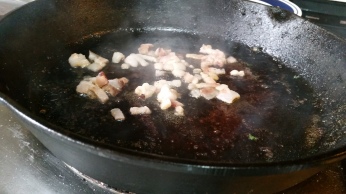 Throw some chopped bacon in a skillet

Saute the chopped greens once the bacon is browned

As with anything you’re eating for the first time, do not eat it in large amounts to insure that you are not allergic in any way.  Also, only consume small amounts of one part of the plant so that you know that one part or the other is safe for your particular body to handle.